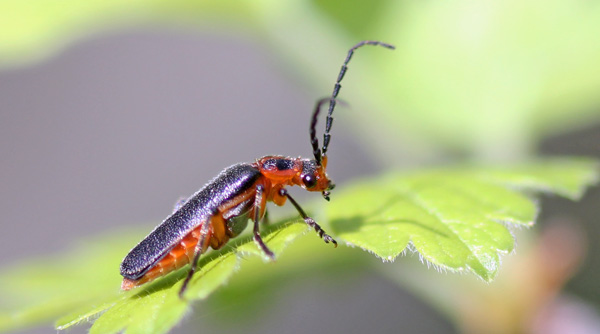 This soldier beetle in the family Cantharidae is commonly called the Two-Lined Leather-Wing (Atalantycha bilineata). They range throughout the Eastern United States and into parts of Canada where they are typically associated with forests and forest edges. I photographed this one in the stand of timber behind my office. They are relatively small at less than 3/8 of an inch, but what they lack in size they  make up for in looks. They are strikingly marked in bright orange and black.

This particular soldier beetle is one of the first to appear in the spring, where you will find them sitting on the surface of various plants. The adults like nectar from flowers, and the larvae feed on other insects. Most likely larval develop takes place in rotting wood. Mating between pairs typically lasts for hours, wherein the female will carry the smaller male around on her back. The male seems reluctant or possibly unable to disengage himself.
Spring is finally appearing here NW Missouri, with beautiful temperatures in the low 70's and sunshine. With this warmer weather, more and more insects are going to begin making an appearance, and I for one am excited. 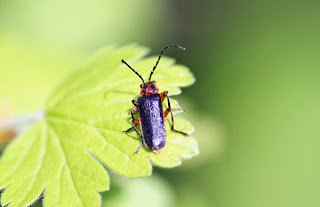