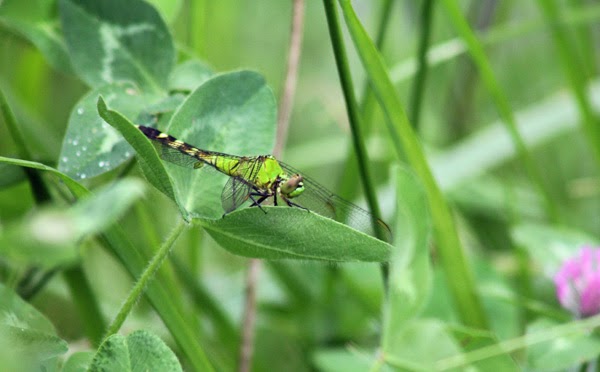 Eastern Pondhawk Dragonflies (Erythemis simplicicollis)
are one of the most common dragonflies throughout eastern North America. There are also small populations in New Mexico and Arizona. They are a medium sized dragonfly with a wingspan of 2 1/2 to 3 inches. The overall color is green and black which allows them to blend in with vegetation near ponds, lakes, streams and other watery areas where they will be found. They often hunt for food far away from water so it is not uncommon to find them in fields, meadows, prairies and grasslands where no water is present. Like all dragonflies they feed exclusively on insects which they capture on the fly. They will use their legs to scoop bugs out of the air and bring the unfortunate victim to their mouth and begin feeding. They are the original inventors of "fast food." They will sometimes land on a nearby perch to finish their meal. 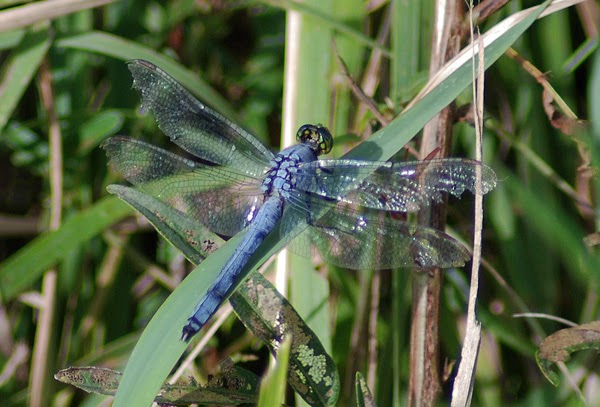 Immature males will be powdery blue (pictured at right) and as they age they will be mostly green. Females are also green with black spots on their abdomen.
These dragonflies also go by the name "Green Jacket" and "Common Pondhawk". They are typically easier to approach than most other species of dragonflies. With over 30,000 lenses per eye they have excellent eyesight and are next to impossible to sneak up on. With dragonflies it is more about temperament, which can vary by species, as well as individuals within each species. 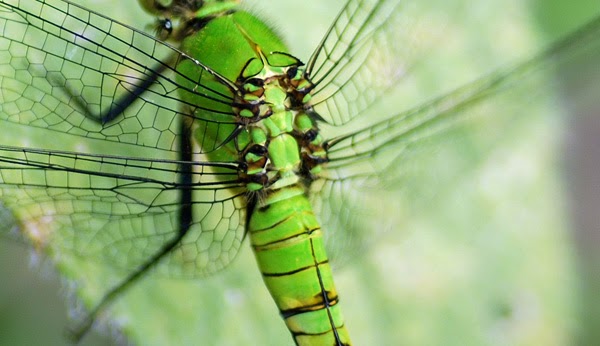 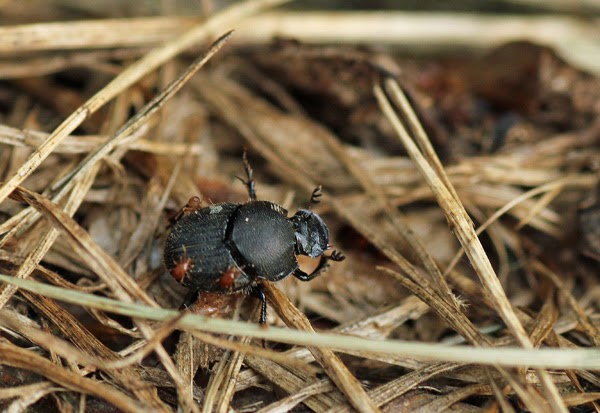 This small black beetle is the Scooped Scarab Beetle (Onthophagus hecate), they are a dung beetle in the family
Scarabaeidae and subfamily Scarabaeinae . They are a small beetle reaching lengths up to 9mm or approximately 1/2 inch. They are uniformly matte black with an excessively pock-marked pronotum. Major males have large horns projecting from their heads. The horns on minor males are much smaller and females lack a horn altogether. It can be presumed that males use the horns for fighting other males to win the affections of nearby females. Many beetles that possess such decoration typically use them to flip their competition over on their backs. Which ever beetle ends up belly-up is the loser and the other wins the right to mate with the nearby female(s).

They are found on dung, rotting fruit, decaying carcasses and other unsavory substances. Once mated, the female will form dung into a small ball and roll it with her hind legs, which extend far back on the abdomen to allow for such movement. She is trying to locate just the right spot in the dirt that will allow her legs to dig. If the dirt is too compacted her legs are not strong enough to dig into it. Once the right spot is located, she will then dig a small burrow or tunnel around the ball of dung until it is buried under ground. Dung buried in this fashion limit fly resources while providing nutrients for plant growth. She will then deposit eggs on or near the dung ball. When the young hatch they will feed on the dung which contains all the nutrients they need. Rarely is the dung consumed in its entirety which leaves valuable nutrients in the soil to aid in fertilization. These beetles are a dairy farmer, beef farmer and ranchers friend because of the aeration to the soil they provide as well as the nutrients they randomly deposit.

Because these beetles feed on dung, limiting or omitting the use of  Parasiticides to control flies on cattle may be necessary to protect your beetles. Many of these chemicals come out in the waste of the cattle and are consumed by flies which is designed to control their numbers, but this can also kill dung beetles. Do you have dung beetles in your pastures? If you have a long history of using any of the following medications for fly control, abamectin, ivermectin, eprinomectin, doramectin, then most likely you won't have any. Want to encourage the dung beetles back to your farm or ranch, then you may want to consider removing these chemicals from your routine. Flies are the bane of farmers everywhere and cause untold problems for livestock, so controlling them is imperative. However there are chemicals available that will provide fly control, but not release themselves into the cow patty. Do your research and determine the best possible chemical to use that will limit harm to the environment as well as to the dung beetles. Dung beetles show up very quickly to piles of fresh dung and to confirm their presence simply look at the surface of the cow patty. Do you see little holes? If so there may be beetles present. You can use a trowel, shovel or your boot to carefully dig into the patty and look for the beetles.

You'll notice, if you look closely that the dung beetle pictured below has small reddish colored mites hanging out all over it. These mites do not hurt the beetle, in fact they are aiding the beetle as a beetle-wash by lapping up nasty little hanger-ons from the buffet of dung, rotting fruit, or carcass they just left. The beetle in turn provides transit for the mites by acting like a greyhound bus to transport the mites to other locations. 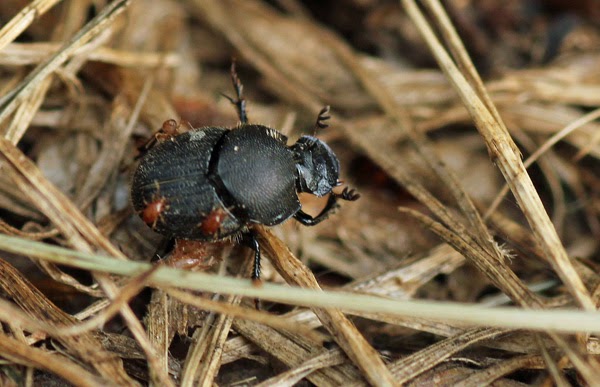 They are found throughout most of the United States with exception of the extreme western portion of the country. They are common in most of their range and often show up at porch lights.
Posted by Shelly Cox at 6:21 PM 1 comment: