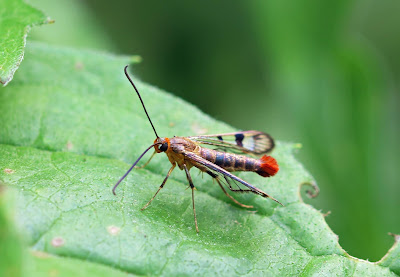 This odd looking bug that resembles something crossed between a scorpionfly and a wasp, believe it or not, is a moth. The Maple Callus Borer (Synanthedon acerni) is native to the Eastern United States and Canada. They are in a unique group of moths called the clearwings, as their wings are nearly scaleless. Acerni in Latin translates to "of maple wood." Definitely an apt species name for a maple muncher.

As one of the most common of the clearwings in the Midwest they are often encountered near their host tree the sweet, sugary maple trees. Most often red, silver and sugar maples are chosen as the host, with a special preference for silver maples.

Eggs are laid at the base of the host tree and tiny larvae bore their way into the sap-wood. They will remain there feeding for a year or perhaps two depending upon the temperatures. A heavy infestation will result in girdling or scarring of the tree. If the damage is severe enough the tree may be in danger of dying or fall victim to high winds and storms. Infestations seem to be more prevalent in large cities rather than in rural areas. Perhaps this is due to fewer options for hosts which wouldn't allow for the moth to disperse. I can envision the females all gathering on one or two available trees growing on the city block, whereas in rural areas there are larger populations of host trees, which gives more options for females to lay their eggs. Or perhaps the opposite is true and they find MORE hosts in the city, after all maples have long been a favored tree in urban areas. Whatever the reason, it seems city trees are far more likely to be infested.

They are one of the few clearwing moths attracted to lights at night. So it would not be unusual to encounter one at your porch light. Another similar-looking insect, the scorpionfly, is also attracted to porch lights. The resemblance between the two is uncanny. These moths are considered wasp-mimics, but perhaps a scorpionfly-mimic would be much more accurate. Then again maybe the scorpionfly is a wasp mimic. In which case, we have a moth that is mimicking a scorpionfly, that is mimicking a wasp. I'm confused!

Expect them to emerge, early in the morning, often in significant numbers in May or early June. The first time you notice them might be as a fairly large swarm at the base of your tree. Controlling them is not always easy. Removal of any damaged or dead branches may help. Treating the tree with chemicals may discourage them or outwardly kill them, but I am not an advocate for using chemicals as they rarely kill the target insect alone. Other species are often a casualty as well. Woodpeckers, by virtue of their long beak and preference for drilling into trees in search of insect prey are excellent natural control of these borers. So maybe try encouraging more woodpeckers to your yard with suet cakes and birdbaths and by leaving large hollow trees (when feasible).