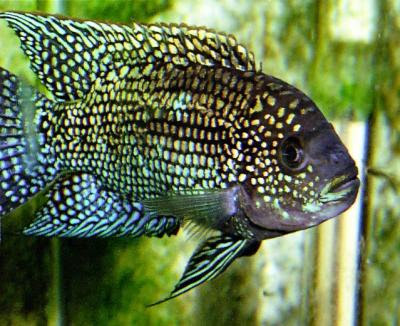 This tropical fish, the Jack Dempsey, now is established in South Dakota.

What resource managers long have feared would happen because of irresponsible fish hobbyists has become reality: An exotic species has established itself in a waterway far north of where it should be able to survive.
Earlier this summer, biologists confirmed that the Jack Dempsey, a South American cichlid related to the peacock bass, is reproducing in South Dakota’s Fall River.

How it that possible?
“The hot springs in the river makes it perfect for cichlids,” said Mike Smith, aquatic nuisance species coordinator for South Dakota Game, Fish and Parks. “We first found a Jack Dempsey there in 2009. Then, two weeks ago, we found multiple-year classes.
“And there’s no way that the fish could have gotten there except aquarium release.”
Water nearest the springs stays at about 70 degrees year around, which allows the exotic fish to survive brutal South Dakota winters.
In this case, the Jack Dempsey’s impact on native species likely will be minimal. Few other predators live in the shallow water, and forage species gobbled up by the aggressive cichlid can be replenished from populations outside the range of the hot spring’s influence.
But the discovery is significant because it confirms that exotics can use thermal refuges provided by springs or warm-water releases from power plants to survive in cold climates.