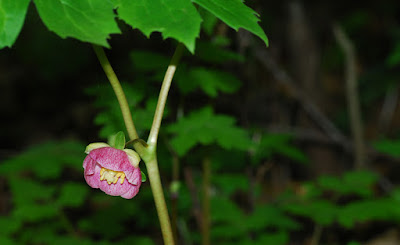 “The green umbrellas are blooming.” cheered the children of long ago as they ventured into the nearby woodlands. The unfurling of the green umbrellas, American mandrake, hog apple, raccoon berry, love apple, witches’ umbrella, or wild lemon for many signifies the return of spring. By whatever name you refer to it as the May Apple is a unique and arguably dangerous plant.

“Down in the shady woodland where fern-fronds are uncurled, A host of green umbrellas are swiftly now unfurled. Do they shelter fairy people from sudden pelting showers? Or are the leaves but sunshades to shield the waxen flowers?” Minnie Curtis Wait (1901)

Their scientific name of the Mayapple is Podophyllum peltatum. Podas, Greek for “foot.” and phyllon meaning “leaf” translating into “leaf-footed” and the species name of pelatum translates into “shield-shaped.” All are apt descriptions of the shape of this wildflower. The green shoots begin appearing in March throughout their range in Eastern North America, and by May the flower buds are present and will generally bloom by the end of May or first of June depending upon the weather and temperatures.

They are capable of living many generations and all plants in a given area begin from a single root and spread by rhizomes underground reaching out in, often times, large colonies. Even though there may be many individual plants spreading out over a large area, they are attached to a single root system making them in essence a single plant. The female, or fruit bearing, individual will have two branching leaves with a bud forming in the “V’ of the two stems. The male plant has a single stem and leaf. It takes two years for them to form buds and fruit. The leaves of the May apple do not unfurl until their stem height reaches between 8 to 12 inches. A single white, cream or pink flower will bloom below the protective umbrella of the leaf, this flower will later produce a single lemon shape fruit, that when completely ripe is edible. The fruit should be yellow in color and soft when ripe, DO NOT eat if still green or hard. All parts of the plant are toxic and can cause severe illness and even death to individuals within a twenty-four-hour period. The mature fully ripened fruit is reported by many to taste similar to lemon only not as tart. The fruit may also be brought into your home to perfume a room with the essence of lemon. 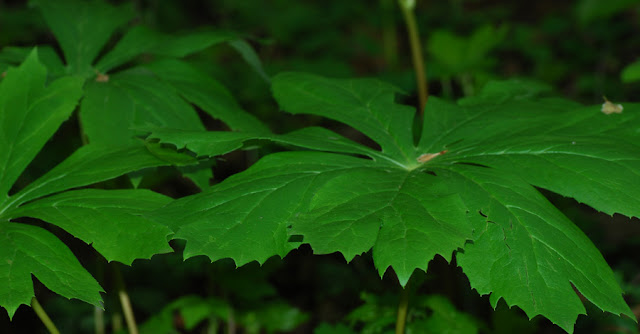 Native nations knew the dangers as well as the benefits of this plant. The root was ground, powdered, and used to treat a vast number of maladies including liver issues. It was also used as a type of insecticide and may still be used today with extreme caution. The insecticide created with this plant is reported to repel insect pests of potato, and corn plants, but should never be applied to any part of a plant you plan to consume. The Shawnee used the boiled root as a laxative and as a topical ointment to remove warts.

Who has ever heard of “Carters Little Liver Pills?” It was pedaled at the turn of the 20th century as a cure for constipation and as a liver cleanse. It has since been banned by the FDA and recognized as dangerous because of the toxic properties of the may apple root which it contained. There are however properties contained within the plant that are known to stop cell division, therefore there are two well-known cancer treatment drugs on the market that contain may apple derivatives and are helping people combat an often-deadly disease. Many herbalists avoid using this plant simply because great caution needs to be used when doing so. It would be too easy to poison yourself or someone else if great care is not used. 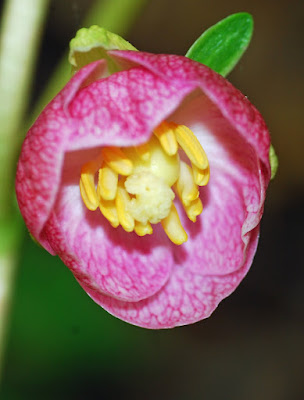 There are four species of Mayapple found in the World, three are in Asia and the one in Eastern North America. It is believed the one we are familiar with came across the Bering Srait with human travelers. It has since established itself as a recognized native to our woodlands. They may also be found growing at meadow edges, along damp roadsides and along riverbanks. They are easy to grow provided they have ample shade, drainage, and somewhat moist environment, although it is reported they can tolerate a bit of drought conditions. They have a tendency to crowd out any other delicate wildflower they share an area with once they are fully established. The foliage is avoided by wildlife because of its toxic properties, and it tastes extremely bitter. When the fruit ripens many animals consume the berry including squirrels, deer, raccoons, skunks, and box turtles. Scientific studies have shown that in areas where the seeds pass through the box turtles’ intestinal tract they germinate more readily. The blooms do not produce nectar, but they do produce copious amounts of pollen and attract bumblebees, long-tongued bees and various other insects that favor pollen. 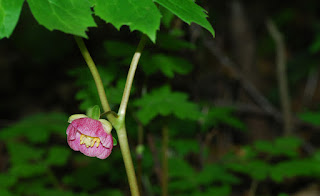 Mountain legend has it that a girl pulling the Mayapple up from the root will surely become pregnant. This superstition probably comes from the belief that the mandrake helps with fertility and the Mayapple is often confused with the mandrake and is even referred to as the American Mandrake by mountain people. Mayapples are similar in appearance but should be considered a completely different plant.

No trip to the woodlands would be complete without the presence of the unique and beautiful Mayapple. They are indicators of a healthy ecosystem, harbingers of spring and signify the upcoming morel mushroom harvest. Just remember “look but don’t touch” when it comes to this charming wildflower.

Posted by Shelly Cox at 4:42 PM No comments: