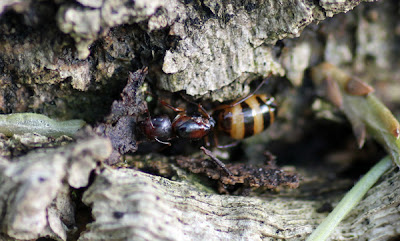 This beautiful little ant is Camponotus subbarbatus, and since I could not find a common name for her.....I took the liberty of giving her one. According to Bugguide their species name of subbarbatus breaks down as follows ----
Latin sub-"under, below, to a lesser degree"+barbatus- "bearded"

I of course realize that many scientists abhor common names and speak strictly in latin vernacular that the average person cannot understand, nor do they wish to in most cases. I do not have a scientific background, but rather spent my life learning and relying on common names. I recognize the problem with common names, as they can change and vary from region-to-region, whereas scientific names will always remain the same....well almost always. Sooner or later a well meaning taxonomic specialist will discover that such-and-such species, is no longer that species, but rather another. Then that species will undergo another name change equally as difficult to pronounce but supposedly places it in a better category with a more accurate name. That is until some other scientist decides different and changes it again. It boggles the mind and confuses the the heck out of me. As I am not concerned with writing scientific papers, or presenting the world with scientific research I give myself permission to use common names as they apply to the region where I live. If the critter in question does not have a common name, then I shall give it one. 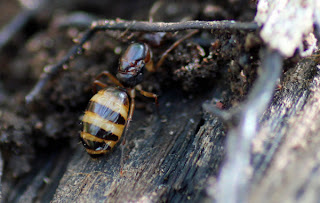 Now back to our pretty little bearded carpenter ant. The one pictured here is a queen and I think the striped gaster (abdomen) is quite attractive and apparently a signature feature of this species in the southeast. They are a small species for ants in the genus Camponotus , which are the carpenter ants. Many species of carpenter ants are quite large and easily recognized by their sheer size and association with wood.

Like most carpenter ants they live in woodland understories making their homes in rotting logs, stumps and other organic structures. They may even be found in tunnels underground. They are found throughout most of the eastern United States from Kansas and Iowa eastward.

This species, unlike many carpenter ants are not known to cause significant damage to homes or other human structures. They require much smaller areas to inhabit as their colonies are smaller by comparison to other carpenter ant species. Typical colony sizes are 3,000 individuals or less.

If you want to see one of these beauties, head out to the timber this spring and open up some rotting logs or stumps and you might be rewarded by the sight of a striped abdomen as it rushes to hide from your peering eyes. 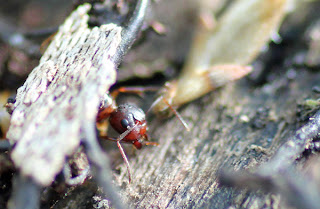