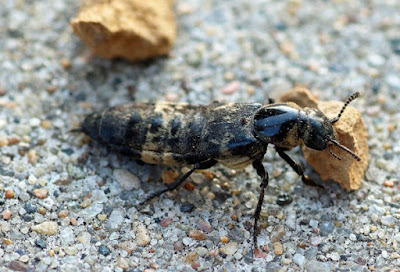 The Hairy Rove Beetle (Creophilus maxillosus) is one of the most common rove beetles in the Eastern United States. Although common, they are rarely seen as most people would have no interest in being anywhere near where they are likely to be found.....decaying carcasses and piles of dung. You can also,occasionally, find them  under leaf litter, rocks or decaying fruit and vegetation. C. maxillosus is in the Staphylinidae family of beetles and considered, as of the writing of this post, the largest group of beetles in the world. There are 2900, or so, species in North America alone.  At one time weevils had the honor of being the largest group of beetles.

These beetles would be difficult to mistake for any other beetle, even within their own family. They are large by rove beetle standards at 12-23 mm (1/2"-1 1/4") in length. The body is black and covered in creamy-gray or yellowish hair-like setae. Their head and pronotum (area behind the head) are shiny black. Like most rove beetles they have shortened wings that leave the segments of the abdomen exposed. Despite the shortened wings they are strong fliers. They are also rapid runners. They will virtually disappear under a carcass as their flattened bodies allow them to shinny under a body in record time. If you find one and place it away from the carcass it will skitter away quickly and disappear in nearby grasses or other hiding spots.

These beetles overwinter in the adult stage and become active as early as February and remain active until October. After mating the female will lay eggs on a carcass that usually hatch in three days, although this is temperature dependent. If it is warm outside expect the three days (or even less) but if the temperatures drop it could take days longer. The larvae feed on the maggots of flies and as well as other insect larva. The adults also feed on maggots as well as other arthropods. 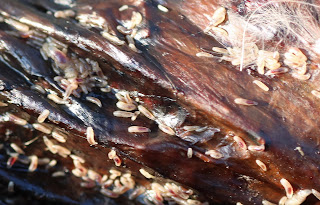 Maggots may seem like an unsavory food choice, but a gut loaded maggot is packed with valuable nutrients. These beetles are also helping control fly populations which is helpful to humans.  These beetles are also used in forensics to help determine the amount of time a body has been dead and exposed to the elements. There is some debate however as to how reliable they are as an investigative tool. These beetles show up as soon as maggots are available, but will continue to hang around for as long as it takes for the body to decompose. So this particular species may not be as helpful as other species when solving crimes of murder.

When severely harassed or threatened adults secrete an offensive chemical fluid that repels other insects, especially ants. This is a great way for the beetle to chase competition away from a food source. I didn't notice a smelly chemical cocktail from this beetle, but the overwhelming smell of rotting flesh coming from it was probably overshadowing any other odoriferous smell emanating from it. Another defensive trick up their 6 little legs is to roll into a ball, much like a pill bug. Their hard exoskelton protects them from many insect predators that might try to feed on them. If you are rolled into a nice tight ball like an armadillo you are protecting your delicate underside from biting insects. Some people claim they have a sharp bite, and with large mandibles like they possess, it would be easy to see how they would. Still other sources claim they do not bite. My experience with this particular beetle was a positive one, even though I handled her numerous times. 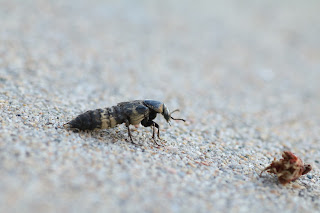