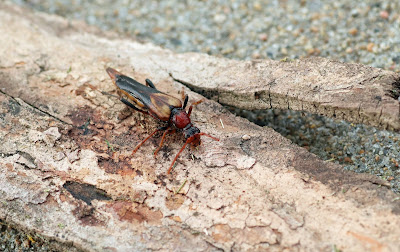 Wasp mimics come in all shapes, sizes and colors and this beetle is a fine example of one. This is the longhorn beetle Bellamira scalaris. It has no common name that I could find, so I am assuming little, beyond the basics, is known about them. They do a great imitation of a paper wasp in the genus Polistes....so great in fact that when it dived-bombed my daughter she jumped and swatted at it when it landed on her shirt. I immediately knew it wasn't a wasp and grabbed it before it could get away. I did not expect it to be this particular beetle of which I was not familiar with until this encounter. My daughter thought I was nuts for grabbing something when I had no idea what it was, especially when she was convinced it was packing a stinger. 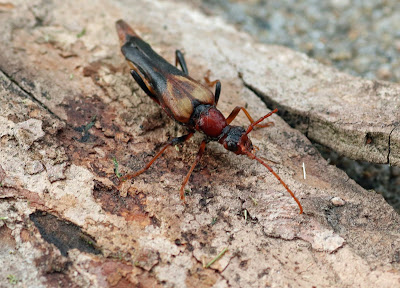 The family Cerambycidae includes all the longhorn beetles, but this particular species does not possess especially long antennae like many others in this family do. The body is elongated and somewhat bottle-shaped. The wings do not quite cover the abdomen and their coloring is a rich reddish-brown and black with tan and black markings on the wing coverings.

They are a fairly large beetle measuring up to 26 mm (or 1 1/4 inches). Look for adults around flowers where they take nectar. Females deposit eggs on trees such as Alder, Maple, Cottonwood, Willow, Hickory and Pine. Where the larvae feed on the decaying wood. Their range is quite large, and includes Southern Canada, southward to all of the Eastern United States and westward to Texas and South Dakota. Even though their range is extensive, they are rarely encountered, which suggests their numbers do not occur in large enough populations to be noticed readily. Or perhaps most people, at first glance, think they are looking at a wasp and pay them no attention. 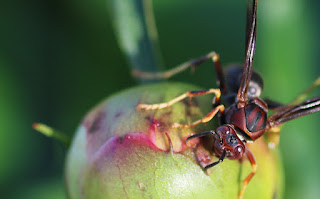 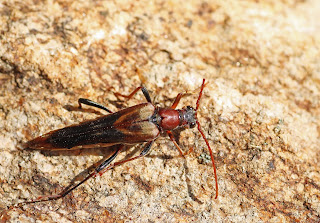 Comparison of B. scalaris with paper wasp, sp. polistes.