One of the most critically imperiled turtles to be found in North America is the Blanding’s Turtle, named for William Blanding (1773-1857), a Philadelphia naturalist who first described it. They are found from Ontario, Canada, south to Iowa and back east as far as New York. The highest population densities are found in the Great Lakes region. They are listed as state endangered or a species of special concern in nearly every state, they occur. The biggest threat these turtles face is the loss of habitat due to agriculture and from major modifications to streams and rivers, such as dam building. Blanding’s turtles have specific habitat requirements that include marshes, sloughs, ponds, lakes, streams, creeks, and vernal pools with shallow water, soft bottoms, and large amounts of aquatic vegetation. With the draining of these wetlands for agriculture and other human endeavors the turtle finds it harder to survive. Added problems this turtle face are vehicles, and predators such as raccoons, foxes, skunks, and even ants feeding on their eggs. Then we must consider that this species reaches reproductive maturity later than most turtles with females being ready to reproduce at about 14 years of age, and males at 12 years of age. With all these things combined we can begin to understand how this turtle has suffered such dramatic population declines.

Blanding’s turtles are semi-aquatic basking turtles that can be found either in their watery habitats or on land. Typically, they will leave water when seeking new areas to inhabit or when looking for places to lay their eggs. In the water they are actually poor to average swimmers and will use the dense aquatic vegetation to support themselves as they move through the water. They are often found floating among the aquatic plants or basking on logs, muskrat mounds and other objects within the water. Blanding’s turtles are medium to large turtles with a shell length from 5 to 7 inches, although lengths up to ten inches have been reported. Males are larger than females.  These turtles are often mistaken for box turtles because of their high domed shells, and their hinged bottom shell.

Their shell is typically dark in color and may vary from gray to black with small light color spots or lines in a highly variable pattern. The bottom shell is yellow with dark blotches. The most distinctive characteristic of this species is the yellow chin and neck. This feature makes identifying them easy as 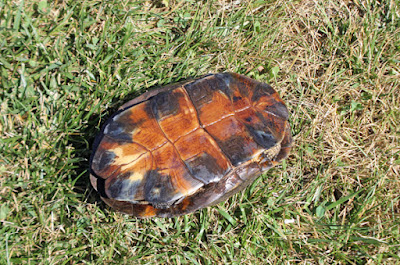 no other turtle in North America has this bright yellow neck and chin. They often look as if they are smiling, which in my opinion gives them an adorable, charming appearance. This species also has an extremely long neck and are often referred to as long-neck turtles and are lumped in with another long-neck turtle called the Chicken Turtle which is critically endangered in much of its range. Even though they share the same long-necked characteristic as the chicken turtle they are not particularly closely related. 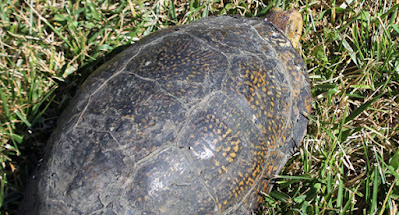 After mating, the female will lay eggs in a shallow burrow. The eggs hatch in about eighty days and the young will head towards the nearest water source. The biggest threat to these turtle eggs is predators such as raccoons, and foxes. As many as 84% of the eggs laid by the Blanding’s turtles may fall victim to predation. Ants can also destroy a batch of newly laid eggs, as well small burrowing rodents like chipmunks. Once the eggs hatch, they are still not out of danger from predation, as foxes, raccoons, skunks, opossums, and large birds like herons and crows all savor baby turtles. Females traveling on land often cross roadways to seek suitable nesting sites and are hit by careless drivers. This takes a devastating toll on the future success of this species. Even a loss of 1 to 2 percent of adult turtles can have long lasting impacts on future generations.

It is common for this species to live more than 50 years and there are reports of specimens exceeding seventy years. Their reproductive cycle does not slow down with age; in fact, quite the opposite is true. The older, more mature females produce larger clutches and are likely to reproduce more frequently. The ability of this turtle to live to a ripe old age and to continue to reproduce throughout its life may be the only thing that ultimately saves them as a species.

In Missouri there are only a few populations in three counties in the entire state. One of those locations is Loess Bluffs NWR in Holt County. A female was found crossing the roadway near one of the wetlands. It was captured, and a transmitter was secured to its shell. This is the first Blanding’s to be tagged in over 25 years on the refuge. Since then, several others have been located and fitted with transmitters. Volunteers, students, refuges workers and local professors all spend time tracking these turtles and documenting their activities. Much can be learned by diligently tracking these individual turtles, information that may lead to break-throughs to help grow their populations. 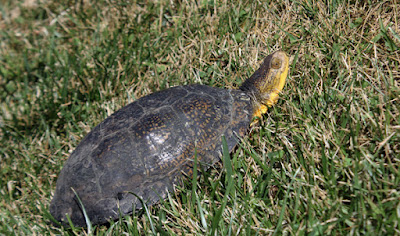 The diet of the Blanding’s is varied and includes crawdads, fish, frogs, tadpoles, leeches, insects, and some aquatic vegetation. In most of the range crawdads seems to make up the bulk of their diet. Blanding’s, like all turtles that occur in colder climates, must hibernate during the winter. They will submerge themselves in the water and lay dormant on the bottom in the mud and silt. Their heart rate slows down, and their bodies become inactive as they wait out the wintry weather. In Missouri they may become active again with the first thaw as early as March.

Much consideration should be given before land development takes place in areas where known populations of these turtles are located. Some areas have had success with artificial habitats in helping secure areas for this turtle to reproduce and live. As nearly all states provide some sort of protection for this species, anyone planning to alter these habitats should be made responsible for creating alternate areas for these turtles to live.

Posted by Shelly Cox at 1:20 PM No comments: