This coppery looking beetle is a metallic wood boring beetle in the family Buprestidae. According to the beetle expert Ted McRae of Beetles in the Bush this beetle is in the genus Dicerca, and may possibly be D. lurida or D. obscura. They occur throughout North America and typically breed in decaying hardwood trees. In spite of their metallic sheen they REALLY do blend in well with the trees they are known to hang out around. 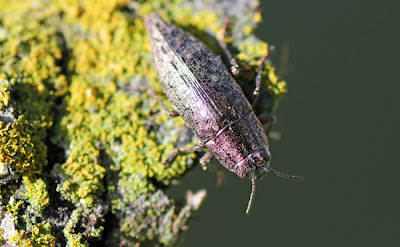 They seem to prefer Hickory trees, but will also invade other newly damaged deciduous trees. Once the trees have reached the point of severe decay they do not meet the needs of the beetle and will most likely be passed by in favor of newer decaying trees. These are relatively small beetles that measure up to 1/2 inch in length. What they lack in size they more than make up for in beauty. 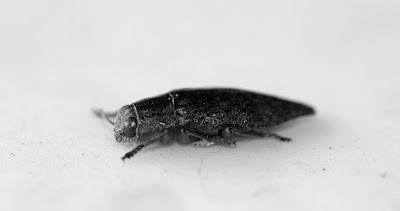