This shiny beetle with the bright orange legs is a Vivid Metallic Ground Beetle (Chlaenius laticollis). Ground beetles are in the family Carabidae pronounced ca-RAB-bi-dee. Beetles within this family are generally nocturnal and prey on other insects species. Most are black, but some like this particular species are metallic in color. Often their elytra (wings) are ridged and their eyes are usually quite large. There are approximately 40,000 species within this family found worldwide and somewhere around 2,000 of those are found in North America. They can be found in habitats that contain dead or decaying trees, logs and other moist environs. They may also be found under rocks or in sandy habitats. They are not known to be in arid, dry,desert areas. They are particularly common in agricultural areas, which is in large part due to the abundance of prey insects associated with crops and livestock. 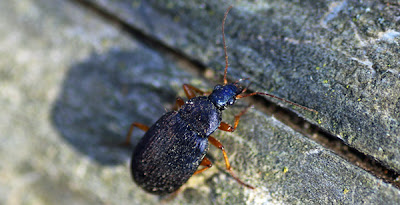 Most ground beetles are considered beneficial to humans because of their preference for eating other insects, some of which may be considered pests.
After mating, most ground beetles lay their eggs on top of the soil. The eggs hatch in about a week. Many larvae lie in burrows or other sheltered areas and wait for unsuspecting prey while some actively hunt through the soil or vegetation seeking out the larvae of other insects. The vivid metallic ground beetles are found in the tribe Chlaeiini which contain 40 species. They are commonly found in the tropics, with a few species found in more temperate zones like Missouri. They typically measure up to 3/4 of an inch and are usually nasty-smelling when disturbed. These are third largest family of beetles, followed by Weevils and Rove beetles. These beetles are easy to find, and can be located simply by looking near pole lights at night. They are attracted to the lights because of the other insects that are attracted to the lights, this makes hunting for their food source easier. 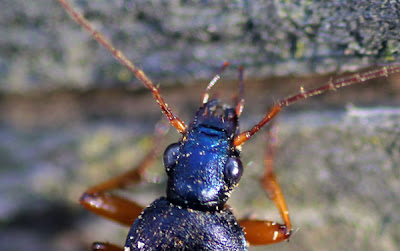