Joey and I decided after lunch to head out into our timber and look for some morels, we began to think we weren't going to find any when he suddenly noticed a tiny gray one about 1/2 tall. After that he found an additional 18 mushrooms. I lamented I wasn't having any luck seeing them. He replied "You are too focused on bug hunting." I had to chuckle at that, because he was right. Oh well, we at least have some to enjoy with supper tonight. 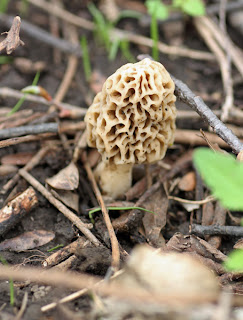 We returned to the house and I noticed a lone honey bee worker sitting on top of the packing crate she came in. After we placed the bees in the hive yesterday, a few hundred remained in the packing crate. I sat it down on the ground to let them find their way into the hive. I checked on them about 30 minutes later and discovered the crate was empty and the bees were all on the hive box with exception to one bee. So I shook her out of the hole in the top of the crate and took the crate to the house and sat it on the front porch.
Apparently there was an additional bee in the crate that I did not notice and this poor little girl spent the night alone, separated from her hive mates and I'm sure she was chilled. A rescue was in order!

I took her picture then coaxed her onto my hand. Once she was on my hand she settled down and licked my finger. Perhaps gleaning any sweat that was there. I walked her down to the hive and about 15 feet from the hive, she perked up, raised her abdomen and began flicking her antennae. She was obviously excited, she could smell her fellow workers and most likely the queen. I gently placed her on top of the hive box and she immediately flew to the front of the hive box with relief. Hopefully her night alone in the cold won't have any lasting affect on her. 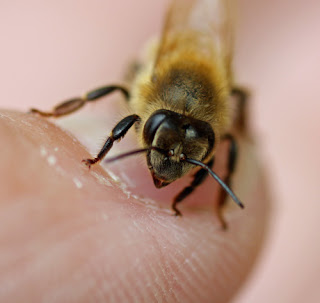