Lessons on how to gross out a 9 year old!

Today Cindy and I had a program at one of the city ponds called Corby Pond. This pond is frequently fished by St. Joseph residents, and why is beyond me. It is a nasty, green water, cesspool with no frogs in sight. The absence of frogs speaks volumes as to the health of this little pond. I for one would not eat anything that came out of it.

Although the pond is icky, the geese use it and so do turtles and the walking trails behind it that lead into the timber are nice, if you can get past the litter that people leave behind.

The group that we met there are 8 and 9 year old students from a local grade school. They are gifted students and the teacher has them working on ecology. They are documenting the species of plants, mammals, birds, amphibians, reptiles and insects that live in and around this pond. We divided the 12 students into teams and I was the leader for the insect team. We found numerous insects on the dandelions and wildflowers blooming around the pond and in the woods. I came to a wonderful rotting log and ripped a piece off of it to see what was living inside.....JACKPOT! 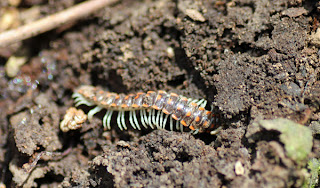 
Ok they aren't insects, but they are definitely living creatures! The three young kids that were with me completely grossed out! I could hear words like
"Disgusting"..."EWWWW"....and "SICK" I picked up a slug and tried to get them to do the same, but they weren't having any of it! No matter how hard I tried I could not convince them slugs were cool, although they did relent on the millipede and agreed it was pretty awesome. After placing the chunk of log back in place, we moved on.

About 100 yards further down on the trail I noticed a rove beetle, then I spotted numerous blow flies, this signals death. I knew something was dead and it was nearby, even if we couldn't smell it yet. I searched around in the vines and grasses and found it! A painted turtle shell. The meat of the turtle was gone and all that remained were some slimy juices of what was once a live turtle. Everything was going great until the scent of dead flesh wafted into the air....then I hear behind me "I'm going to be SICK!" ....."Oh How GROSS!"...."Miss Shelly this is stinky...can we go?" I pulled the shell out of the brush, and placed it on the trail and showed them all the insects inside that were working at breaking down the body of the turtle. We talked a little about decomposers and their role in the environment. Having this dead specimen to use as a teaching tool was perfect. Once the kid's senses adjusted to the onslaught of the smell of death, they admitted it was pretty awesome how Mother Nature works. 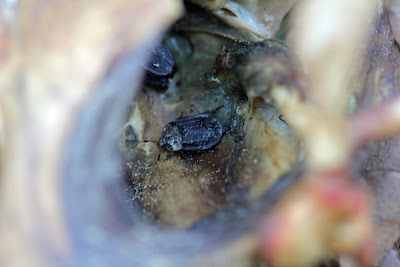 (Carrion Beetle feeding inside the turtle shell)
The lessons these kids learned today will stay with them for a lifetime. They will always remember the scent of death, and the importance of the creatures who clean it up. It was fun for me to be able to show them that death is part of life and that all living creatures eventually die, and part of that process is decomposition. I was tickled by their initial responses and how at the end of the day they thought it was pretty cool! I still couldn't convince them to like the slugs though...!
Posted by Shelly Cox at 4:39 PM