After reading the book "The Queen Must Die" I became obsessed with the idea of having a hive of my own. Honey Bees (Apis mellifera) are without a doubt one of the hardest working creatures in nature. More research has been done concerning the honey bee than probably any other insect in the World. There is good reason for this, honey bees are an important part of the  natural world. They provide an important service in the form of pollination....without them there would be many foods we would have to learn to live without. While it is true that native bees, butterflies and other insects also pollinate flowers and plants meant for human consumption, they do not do so with the vim and vigor that honey bees do. 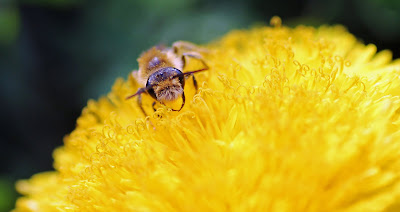 Thousands of years ago humans discovered the delicious by-product of honey bees....HONEY! Since that time there has been no looking back. Humans have gone to great lengths to own these bees and master the hive. Humans are well known for their sweet tooth and honey has long been considered a valuable commodity.
Many insects nectar at flowers, but honey bees are the only insects known to refine the substance into a delicious sweet treat that humans savor. They are such industrious honey producers that they are capable of creating enough honey to see the hive through harsh winter months with enough leftover for us!

For three years now I have read everything I can get my hands on about honey bees and finally made the plunge and bought our first bee hive and honey bees. Joey spent several days this winter putting the box together and painting it. Today we drove to Auburn, NE about an hour from where we live and picked up our three pounds of bees. This is equal to about 11,000 bees.

I am so excited by this new adventure I can hardly stand it, Joey less so. He has a notoriously bad time when it comes to stinging or biting insects. He is attempting to overcome his deep-seated fear of these little bees. We bought him a super-duper bee suit that is supposed to be completely bee proof. We got him a pair of longggggg leather gloves and an awesome hat and net that zips into his bee suit. He will be safely contained from the business end of these creatures.


We brought the bees home in the trunk of the car (Joey refused to let them in the car with us, even though they were contained) where it was exceedingly warm, when I took them out of the trunk they were very active from the warmth. We set up the hive beforehand and carried our little box of bees to the hive. 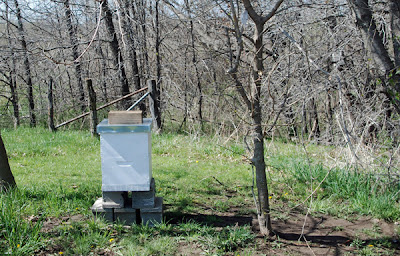 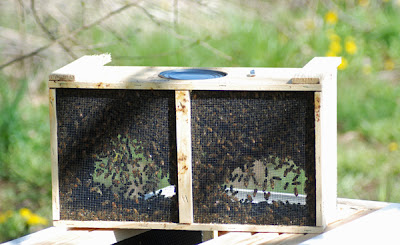 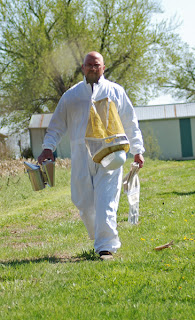 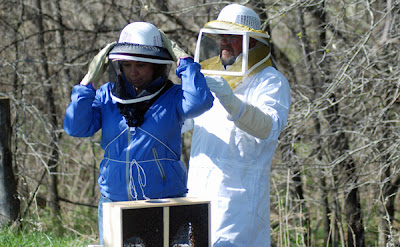 (Making sure the net is secured) 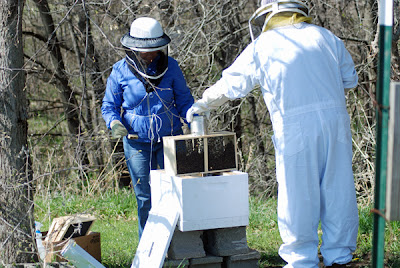 (Removing the Sugar water can that was shipped with them to keep them hydrated and fed)
We debated back and forth the best method to get them into the hive box. There are two recommended ways to handle this transition:
1.) Remove 4 frames from the hive box and set them aside. Seal the entrance to the hive, leaving only a one or two inch gap for the bees to come and go. Shake the bees to the bottom of the box, remove the sugar water can, slide the little box out that contains the queen. Cover the hole where the can was to prevent all the bees from flying out. Place the box with the queen against on of the frames. Then remove the sugar water can again and place the entire box of bees inside the box where the 4 frames had been removed. Close up the hive and let the bees crawl out on their own. This method requires that you check on the hive again in about 5 minutes to make sure they are leaving their shipping box and moving towards the queen to keep her warm and feed her through the screen on her little box.Then you have to return in three days to release the queen and replace the four frames you originally removed.
2.) The second option is similar to the first with the exception to how you put the bees in the hive box. This method requires that you "shake" the bees out of the hole in the box left behind by the sugar water can. 75% of the bees need to be shaken into the hive box and then the 4 frames placed back inside, being careful to not crush any bees in the process. Then close up the hive. Set the shipping box with the remaining bees on the ground hear the entrance. Those bees will find their way into the hive when they smell the queen and their fellow honey bees.

I ultimately decided that method 2 would be the best. This method would allow the bees to find their queen much easier and warm her much faster. 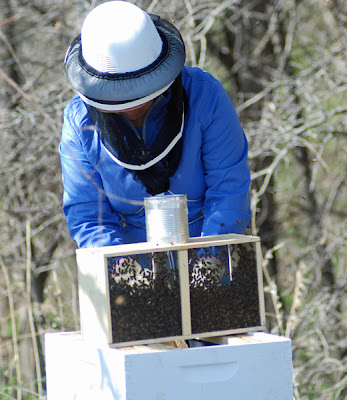 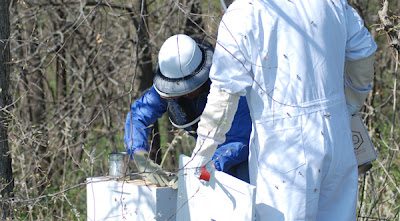 (Placing the queen inside the hive) 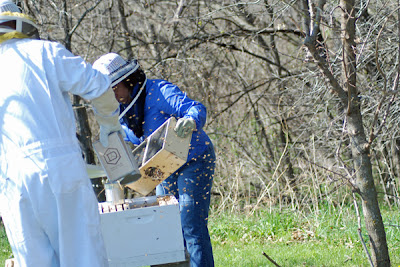 (Shaking the bees into the hive box) 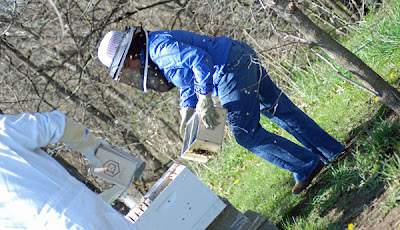 (Notice the bees buzzing all around us) 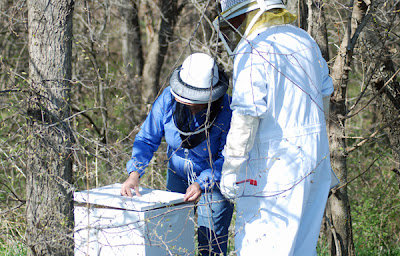 (I decided working with gloves on is far to cumbersome) 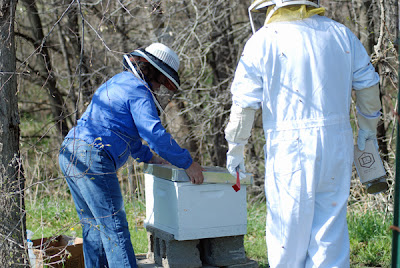 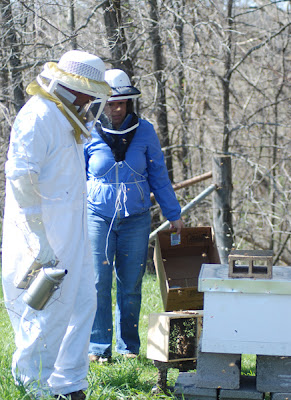 (All done, for day one)
Joey did remarkably well and only had a momentary panic when the bees swarmed after shaking them into the hive box. I talked calmly and told him he was fine, that the bees were not angry, just confused. I am just happy he was there to help and proud of him for being willing to do so. I know how hard it is to face a phobia, and he faced his and did AWESOME!
In three days we check the hive and remove the screen on the queen box and release her to the hive. Hopefully everything will go well and our hive thrives. Stay tuned!
Posted by Shelly Cox at 5:55 PM