All Hail the QUEEN


After installing our bees this past Saturday the weather has been icky and cold. The high temperature yesterday was 42 degrees and rainy. Today's high is supposed to be in the low 50's. This is absolutely cruddy weather for our new little bees.

The queen is shipped in a small box that separates her from the workers. There is a little screen over one end that the workers can feed her through. This allows the workers to become familiar with their new queen and accept her as their leader. They will walk all over the box and pass their scent onto her and then they will recognize her as THEIR queen. She had been in this box since being shipped from California (last Wednesday) to Missouri. We were told to keep her in the box for three days. Technically she should have been released yesterday, but with the rain I did not want to open the hive.

Today HAD to be the day, I simply did not want to wait any longer. The sooner she is with her minions the better off she would be, and them as well. After getting the smoker ready, I grabbed my camera, and hive tool and headed to the hive. After opening the hive top, I pried the inner lid up and Joey lightly smoked the bees. I reached for the tiny little box that contained the queen. She was still alive and very active....GOOD SIGN! The bees were concerned for her welfare and buzzed around my head and hand that was holding the queen. The workers seemed to know I meant the queen no harm. They crawled all over my hand as if trying to protect her and let her know they were there for her should the need arise. I gently pried the screen off the little box and placed it in between two frames and let her crawl out on her own. Many workers swarmed around her and escorted her out of her little prison. 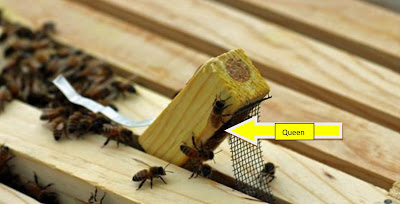 Once she crawled out I dropped the little box down into the hive, figuring it would contain her scent and cause the bees to follow it and the queen further into the hive where they would be safer, as I did not want to risk smashing her when I replaced the lid. They seemed so happy to have personal access to their queen, rather than having a obstacle in the form of a box and screen in their way. Lets hope the hive meets with her approval and they stay put. I know any beekeepers biggest fear is that the bees will retreat to other areas and abandon the hive. I will say a prayer to the bee Gods that they are content and happy.