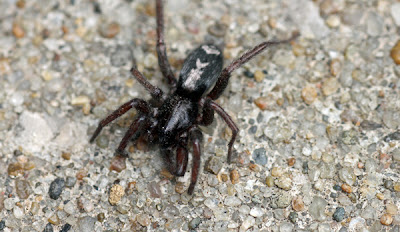 This afternoon when I got home from work I noticed this little spider crawling around in front of the door to the house. I could tell right away it was different than any spider I'd seen before. It had approximately a 3/4 inch legspan, was all black with reddish colored legs, and beautiful white pattern on its abdomen. I photographed it and submitted the photo to spideridentification.org and received an answer very quickly from Lady Aracnophile who identified it as an Eastern Parsons Spider (Herpyllus ecclesiasticus). She even provided a link to bugguide.net where other images of this spider are located. Apparently they are almost identical to the Western Parsons Spider (H. propinquus). To adequately differentiate them you have to look closely at their reproductive organs. I was able to provide an image of the underside of this spider which hopefully helped in accurately identifying this spider. 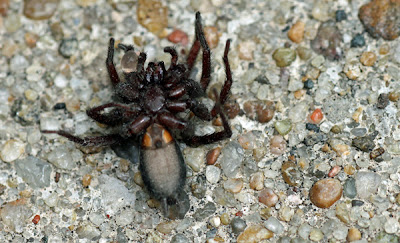 (No spider was harmed in the taking of this photo)
They get their common name of Parsons Spider from the white markings on the abdomen which are said to resemble the cravat worn by parsons or ministers during the 1800's. This spider is harmless to humans and pets, in fact they are only harmful to the prey they actively hunt, which is commonly other spiders. They do not build webs like many other spiders, instead they are ground spiders that roam around to hunt for their food.  They are voracious eaters and chase their food down and overpower it. They are commonly found in houses, which is where this one was headed when I stopped it for a photo shoot then placed it in the garden.

They will spin silk to create hide-a-ways to retreat to during the day. Silk is also used by this spider to spin egg sacs, that the female will guard until the spiderlings emerge.

I've been actively studying and photographing insects and spiders for 7 years and just when I think I can't possibly find anything I haven't previously seen, I am pleasantly surprised by creatures like this parsons spider. Just goes to show, when it come to the tiny majority, there is no end to the wonderful discoveries to be found.