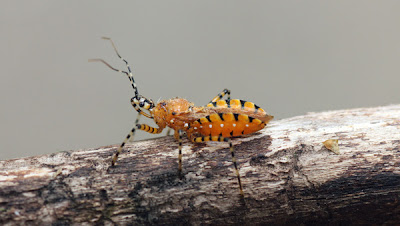 This gorgeous bug is the Sycamore Assassin bug (Pselliopus barberi) . My grandmother found it crawling on her sweater. My mother scooped it up and put it in a jar and brought it to me to identify. I knew it was an assassin bug, I just didn't know  which one. I photographed it and searched bugguide.net. There were numerous images that matched it and v.belov felt it is the barberi species in the genus Pselliopus . There are 22 known species within this genus. They range throughout the Eastern United States as far west as Kansas. This is a relatively small species at 3/8 of an inch in length. What makes it so remarkable is the color and pattern. They are tiger orange with black stripes....which makes me think Tiger Assassin would have been a better name. The legs and antennae are banded. 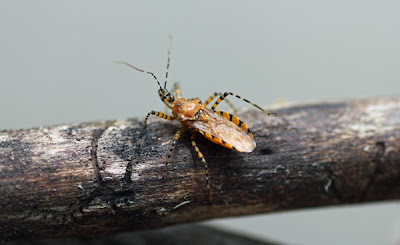 Assassin bugs typically feed on other insects and the Sycamore Assassin will feed on insects that are attracted to flowers. They use their beak-like mouth to inject their prey with an enzyme. The enzyme is designed to break down the tissue of the insect so that they can suck out the insect juices like an insect-slurpee. 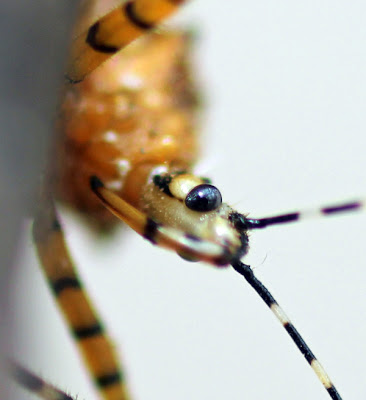 (Close-up of beak-like mouth)
The adults overwinter each  year and typically show up in early summer. The past few days have been sunny and warm, which probably woke this little bug up from its winter nap. Mating takes place in the spring, and the female will lay eggs in small clusters on the underside of leaves. The eggs hatch and the little nymphs feed on tiny insects. They will be adults by September. These new adults will overwinter in secluded areas, under leaf litter, bark of trees, or some species will even spend the winter in human dwellings (which is typical of this species). The cycle will begin again the following spring.
Assassin bugs in this genus are being used as a form of biological control of harmful or invasive species of insects. They are neither beneficial or harmful. They feed on any insect they can catch including those that we would typically consider "good" bugs like bees, small butterflies and flower flies.