War of the Termites and Ants 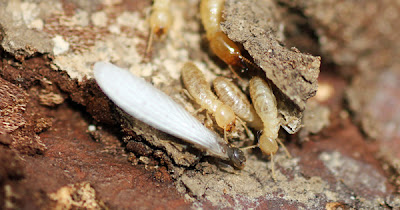 I visited one of my husbands family farms yesterday and spent a good part of the afternoon looking for insects. I tore open logs, kicked around in the leaf litter and walked for what seemed like miles. One log in particular was full of critters, like these subterranean termites. In the picture to the left you can see a new winged male or female, the workers and a soldier termite (large brown head). Every homeowners nightmare is to end up with these destructive insects infesting your house. Admittedly that is never a good scenario, but in the wild they perform a much needed service of breaking down decaying and rotting wood. No harm, no foul, when in their proper habitat. In the spring large numbers of winged adults appear looking for mates. After mating, the females will locate areas to begin new colonies and the males will die. Soon after the female sets up house, she will shed her wings and spend the rest of her life laying eggs and growing the colony. She will tend to the first eggs herself, then once they have matured to adult workers they will take over the care of all future offspring of the queen. The workers, expand the nest, feed the offspring and clean house. Soldiers are created to guard the whole colony. They possess large heads and mandibles that will inflict painful bites to other insects intent on invading the colony.

After disturbing this colony, I also inadvertently disturbed a colony of  reddish colored ants (Aphaenogaster tennesseensis). With the termites exposed, the ants took full advantage of the available food source and began attacking in earnest. I saw one worker ant attack and drag off a newly emerged winged queen. 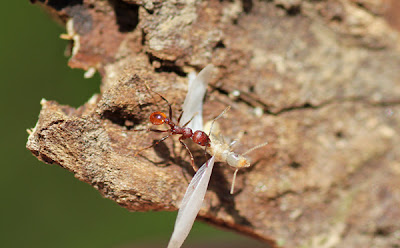 In spite of the fact that this winged termite was much larger than the ant, it was determined to drag it home to feed its own colony. It tugged, it pulled, it walked backwards, forwards, but never once did it let go of that termite. The termite was very much alive and wiggling around trying to free itself, but the ant was having none of it! 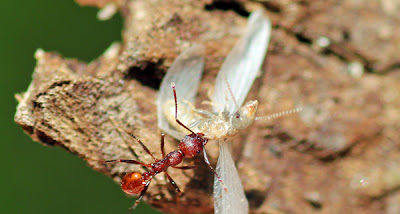 I found approximately a dozen worker ants all with termites in their powerful jaws, dragging away their captives. We all have heard that ants are the strongest creatures on the planet in terms of what they can lift compared to their body size. After looking at these photos it is easy to see why. These two species lived side-by-side under the bark of that tree, seemingly oblivious to each other, but once I did the unthinkable and tore off the bark of that tree, it was mass chaos. The ants saw an opportunity and took full advantage of it, and the termites seemed defenseless against the onslaught. I sent these pictures to a friend of mine, who is an expert on ants....and he put it most eloquently when he stated "It is a Bug-eat-bug world out there!"