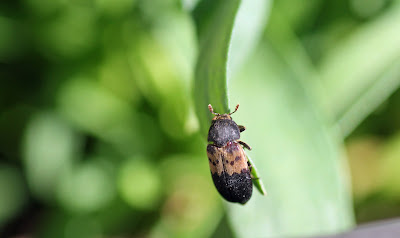 Bacon Beetles or Larder Beetles (Dermestes lardarius) are common beetles associated with humans and our dwellings. These are small beetles measuring little more than 1/4 of an inch up to 3/8 of an inch. They are banded black with a golden colored middle stripe with black speckling.  They invade our food stores, especially grains, and are also fond of taxidermy specimens. Museums spend a great amount of money and time keeping these  beetles out of their preserved displays.

They are not native to the United States, but were accidentally introduced from Europe and the Near East. Some taxidermists use these beetles to clean meat and skin from bones. These beetles are easy to keep as a hobby insect, just provide them with water, a place to hide and food. They will eat almost anything, including grains, carrion and pet foods.

The one pictured here was found crawling on the ceiling in my bedroom. Later in the week I found an additional one crawling on the bathroom floor. It would be a nightmare to get these started in our house, as my husband and son are both hunters and have mounted specimens of their hunts. These beetles would feed on those prize trophies and destroy them in no time, much to the horror of my husband and son. Once started in a home they are difficult to get rid of. They will hide almost anywhere and thrive by eating nearly anything they can find. I hope I found the only two sneaky little beetles, brave enough to enter where they aren't wanted.
Posted by Shelly Cox at 1:06 PM