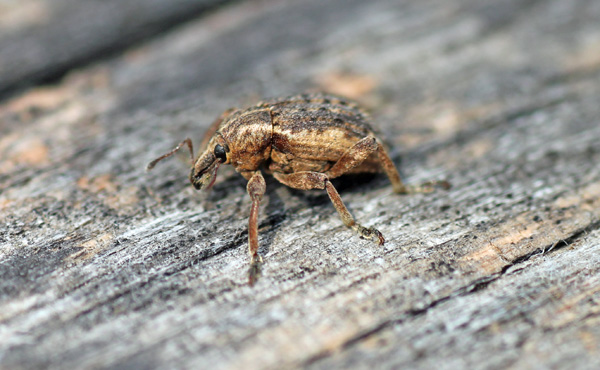 Weevils are the most common of all the beetles in the World, with over 60,000 species to find and photograph there is no shortage of interesting specimens. The one pictured here is the Clover Leaf Weevil (Hypera punctata). This weevil is found throughout most of the United States, and is often mistaken for the Alfalfa Weevil, this confusion probably comes from the fact that both species look similar and feed on the same host plants. The clover leaf beetle is less than 3/8 inch in length and is brownish in color. They have brown, gray and yellowish markings on their back giving them a mottled striped appearance.
The clover leaf weevil is nocturnal and feeds only at night and will hide during the day in leaf litter at the base of the plants or on the underside of the leaves of the plants. On dark, cloudy days they may be seen feeding throughout the day. There is only one generation each year. The adult, which is present from July through October, lays its eggs in stems, on stalks, or near the crowns of plants. The small green larvae hatch in the fall and spend the winter in the soil. Most eggs will hatch in the fall, but some will overwinterand hatch in the spring. They become full grown in late May and June, when they pupate in the soil debris. Adults emerge from May to July and feed for a short period of time before becoming inactive. Beetles resume activity in the fall and lay eggs.
Damage to alfalfa is usually minimal, however in the spring damage may be apparent before alfalfa weevils make their appearance. Most feeding by larvae occurs in late March and the first 3 weeks of April. Larvae skeletonize the leaves of the plants, leaving them ragged and in some cases almost completely defoliating the whole plant. The effect is the same as though newly forming leaves were removed from the plant each day. In some cases the plants may die. Under normal growing conditions, however, the clover usually recovers from injury when weevil numbers are moderate. 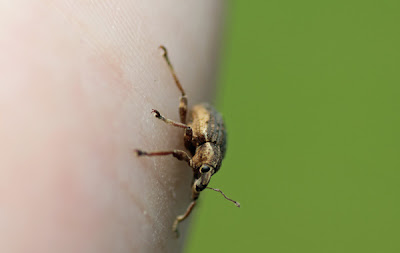 During a cool spring when growing conditions are unfavorable, this defoliation may seriously stunt clover growth. Damage is usually most severe in fields with a heavy residue cover. The larvae feed throughout the day beneath residue, and the plants, shaded from the sun, do not have an opportunity to grow away from the damage.
Clover leaf weevils are generally not considered a problem, unless they are numerous enough to retard growth in the spring. They are often kept under control by a naturally occurring fungus and an ichneumon wasp.

If natural measures are working then applying insecticides is truly overkill. I never recommend chemical control of any insect except as an absolute last resort. My husband farms over 500 acres and hasn't used insecticides or fungicides in 15 years. By allowing predatory insects and bats to thrive they have done their job well enough to eliminate the use of harmful chemicals. Insecticides are not species-specific which means they will not only kill your target insects, but will also kill beneficial insects. Chemicals create an unbalance. Once you use insecticides as a preventive against potentially harmful insects in your fields on an annual basis, you will become dependent upon them every year. This causes untold amounts of damage to the environment....including contamination of our water systems.

Imagine this.......you pay to spray your fields.....95% of the damaging insects are killed...leaving approximately 5% of the insects alive. These 5% will mate, lay eggs, and the resulting larvae will contain a certain amount of resistance to the chemical that killed the previous generation. This new resistant generation will mate and lay eggs and pass on an even greater resistance to the chemicals used. So on and so on. Eventually the chemicals will not work. This means a different chemical will have to be implemented in the future. These chemical resistant insects are what chemical companies rely on.  New chemicals will have to be created, which costs money. The cost is passed onto the consumer in the form of the actual cost of the chemical and the application. The only one who truly benefits is the chemical company.  In the meantime, you have also wiped out 95% of the beneficial insects, and the remaining 5% will find it difficult to survive without a reliable insect food source. With the absence of beneficial or harmful insects, you will also eliminate your bat population which are also key in insect control. We are proof that allowing predatory insects and bats to control harmful insects is not only cheaper, but healthier. It works!

If  you do not HAVE to use chemicals, then don't, allow mother nature to control the insects feeding on your crops. Remember if you ever get started with chemical control, it is highly likely you will always have to use it and in this day an age when we are all trying to find ways to eliminate costs, this is one way of doing so.