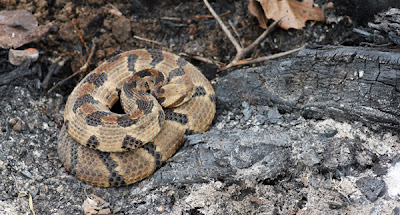 Once again I am excited to feature a creature that is of the reptile variety instead of the insects you would normally find here. When I come across such magnificent creatures as this one, I can't resist sharing.
Snakes are one of those animals that illicit strong fear or outward dislike among many people, and that it is so very unfortunate. Snakes may be a bit peculiar, and a tad bit creepy, but they are also incredible and uniquely beautiful. Even people who have tolerance for the non-venomous variety of snakes, seem to have zero tolerance for the venomous kind. I know this comes from fear and lack of knowledge of the snake and the potential danger it represents. Yes, all venomous snakes should be respected and given their space.....however, there is no real need to live in fear of them. They are not out to get us, in fact they go out of their way to avoid us whenever possible. 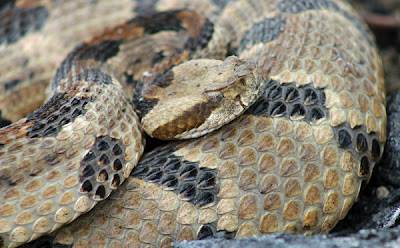 The other day Cindy and I drove to Guilford, Missouri to do an outdoor safety program for their elementary school. We spent a couple of hours there talking about everything from poison ivy , ticks, and spiders to snakes. When we finished with the presentation, we decided to stop by a farm my husbands family owns to see if we could find any snakes. My brother-in-law had been seeing a Bullsnake on this particular farm and Cindy and I were anxious to find it and photograph it. We had approximately 30 minutes to kill before we needed to be at our next program. We pulled into the farm, grabbed our cameras and began walking towards a large concrete slab that used to be the base of a shed that was torn down many years ago. We noticed my brother-in-law had burned all the grasses which made it easier walking and gave us better visibility for spotting snakes. On the concrete slab there are numerous stones, and pieces of tin piled up here and there. I walked over to a piece of tin and flipped it over, and voila! I looked at Cindy and said here it is! Well it wasn't the bullsnake we were after, but it was certainly an incredible snake....a Timber Rattlesnake. This is the largest venomous snake in Missouri and the most venomous. To say we were excited would be an understatement. This one measured approximately 3 feet in length and had 4 rattles on its tail.

We began snapping pictures, and between the two of us we took well over 100 photos of this very tolerant snake. Cindy was beside herself as this was the first rattlesnake she had seen alive. She looked at me and put her hand in the air to "hi-5".....as soon as our hands connected and made the loud clapping noise of our very exuberant "HI-5" it apparently frightened the snake and it struck at us! Cindy shrieked, and turned around and ran.....right over the top of me. The snake started rattling, and I couldn't quit laughing! Poor Cindy was shaking from the adrenaline rush, and the snake was ticked off at the two crazy women who were pestering it! The snake turned tail and ran away, never once ceasing to rattle. 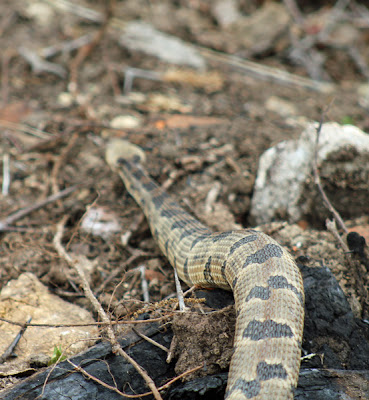 The snake was making a hasty retreat to the nearest rock pile. It slithered underneath a large flat stone and found his way was blocked! It was literally beating its head against a brick wall under that stone and could not hide sufficiently which further irritated the snake, and it began rattling louder. We watched as he/she backed out and moved to the right and found another way under the stone, and was finally able to disappear. 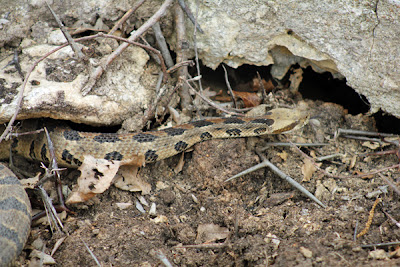 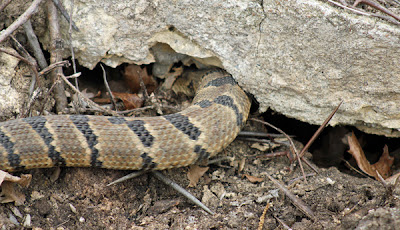 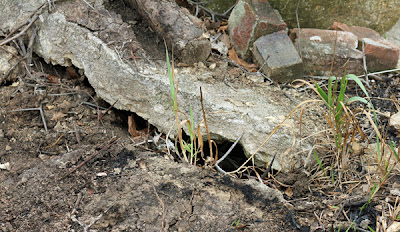 Last summer I had my very first experience with these wonderful predators, so I knew exactly how Cindy was feeling, and I shared her enthusiasm for this poor misunderstood beast. I posted a blog about my rattlesnake encounter last July, and if you are interested in reading about it and looking at the pics of a much larger snake please visit Explore Missouri--Timber Rattlesnake. 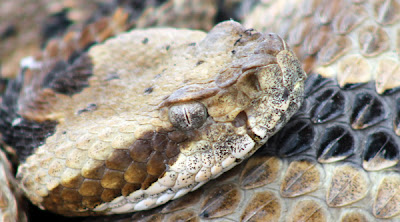