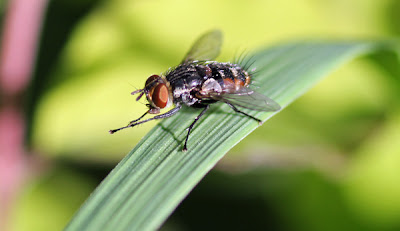 This pretty little fly busily cleaning his legs is a tachinid fly in the genus Winthemia. They are a large group of flies with approximately 28 species in North America alone. As adults they feed on plant juices, and nectar.  As larvae they predominately  feed on caterpillars. The adult female fly will lay up to 8 eggs on the caterpillars of moths such as the giant silk moth Cecropia and many species of sphinx moths. The female typically looks for older caterpillars to lay her eggs on. This is presumably so that the caterpillar does not shed its skin and slough off the fly eggs in the process. The fly eggs hatch and the larvae burrow into the caterpillar and consume it from the inside. When the flies are ready to pupate they will work their way back through the skin of the caterpillar and fall to the ground. They burrow into the soil to pupate. The caterpillar they left behind is destined to die. They may also use some beetles or sawflies as host insects for their offspring. In some cases their preference for using moth caterpillars could be considered beneficial, if they choose moth caterpillars that are harmful to crops or garden plants. In reality though, they aren't choosy and will pick any available caterpillar as a host, including the beautiful silk moths.
The species pictured here was small at less than 3/8 of an inch in length. Several of them were flying around the jewelweed and tall grasses near our garden. I've also seen a species of sawfly hanging around the jewelweed. I am beginning to wonder if their sudden appearance together is more than a coincidence. Maybe the fly is following the sawfly and will use their larvae for their own offspring to feed on. 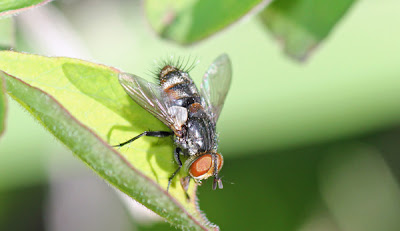