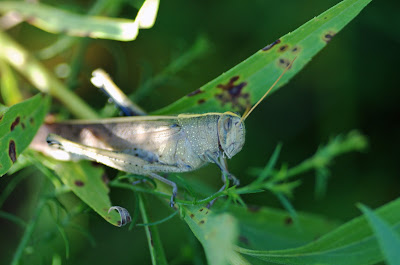 Spotted Bird Grasshoppers (Schistocerca lineata NO TAXON-typical) are one of 50 species in the same group of grasshoppers that are typically called locusts. The locusts are famous for their swarming capabilities. Millions of these grasshoppers would gather and swarm in huge black clouds that would descend on fields and destroy crops. Many years ago in the United States settlers were faced with huge swarms of Rocky Mountain Locusts. These swarms would blacken out the sky and create fear and dread in all who seen them coming. Nothing would be left behind when these hungry beasts would appear. There was a swarm in the mid 1800's that was reported to be larger than the whole state of California. The swarm was estimated to carry trillions of these locusts. The Rocky Mountain Locust is now extinct in our country and no one seems to have a definitive answer as to why. The last reported live specimen was in Canada in 1902.  I guess we should just be grateful they aren't plaguing us and not ask too many questions. All grasshoppers within this genus have the ability to swarm and some do seem to gather in large numbers, but fortunately nothing as Biblical as the Locust Plague of Moses' time. Or as awful as the Rocky Mountain Locust swarms of our own country's past. In Africa and other countries they are still plagued by huge locust swarms and chemicals such as DDT that has been banned here in the US are still being used there in large quantities to try and control mass population explosions of these eating machines. 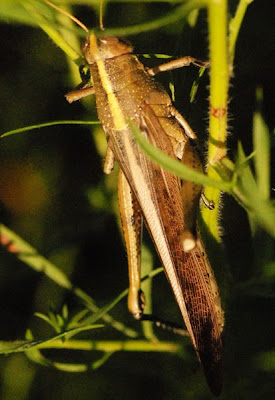 The Spotted Bird Grasshopper is very wide spread and common throughout the Great Plains and Prairie States east of the Rockies. They favor fields and open areas with herbaceous or woody plants to feed on. If they occur in large enough numbers they can cause significant damage to crops. There is some difficulty in identifying this species. Their color can vary by region and if crossbreeding is occurring. This particular species can be brownish, olive, tan or greenish in color. A bold stripe down the back is typical of most bird grasshoppers, and this species seems to have spots on the thorax which probably what earned it the common name of Spotted Bird Grasshopper. They are very large and may reach lengths up to 3 inches. The hind tibiae (lower legs) are usually brown or black.

The mating cycle of these grasshoppers is very similar to that of other grasshoppers. They will mate in late summer and the female will lay an egg mass in the soil that may contain up to 20 or more eggs. These eggs will overwinter and in the spring the young nymphs will emerge. They will look very similar to the adults but lack wings. In warmer climates the adults may overwinter as well.

These grasshoppers are reported to be good fish bait, and I can certainly see why. Their size alone would attract a hungry fish.
Posted by Shelly Cox at 10:59 AM