This odd knobby-looking caterpillar is the offspring of the Question Mark Butterfly (Polygonia interrogationis). This year seems to be the "Year of the Question Mark", I've seen more of these caterpillars and adult butterflies than any other species. The first photo of the caterpillar was taken on an elm tree, and there was no less than 30 other caterpillar on the same small tree. I've seen them on several other elm trees around our property as well. I've even brought several into the house and reared them into adulthood.
They are found throughout the eastern 2/3 of the United States, except for central and southern Florida. There are populations in Southwestern Canada as well. 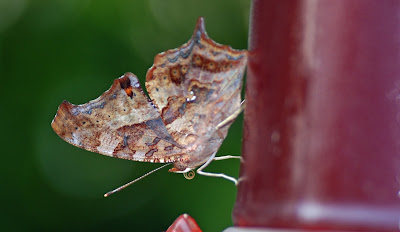 They are fond of sweet treats like this nectar from the hummingbird feeder, they will also feed on rotting fruit, carrion, dung and sap flows. The caterpillars feed on elm, false nettle, nettle, and hackberry. 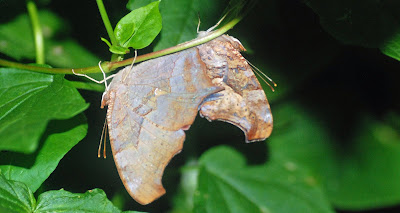 Love is in the air. This mated pair will create offspring that will overwinter as adults. They will secure themselves in leaf litter, and other sheltered areas. In the spring they will become active on the first warm days. They are often the first butterflies seen in early spring. Their close cousin the Comma Butterfly has a very similar lifecycle. They also look much the same. The Question Mark and the Comma both have orangish-red wings and blackish hindwings. There are various black markings on the forewings. The question mark has an extra dash on the forewings that the comma does not have. On the underside of the hindwing are the distinguishing markings that identify this species from its cousin. The Question Mark has a silvery-white "question mark" that is visible in the above picture. The Comma Butterfly has a silvery-white "comma". This species is medium sized with a 3 inch wingspan. The winter form of this species is orange-black with longer violet tipped tails. These violet tipped tails also earns this butterfly their other common name of "violet-tip butterfly". 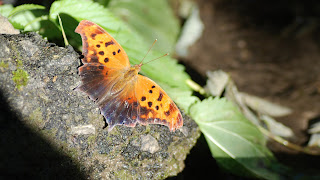