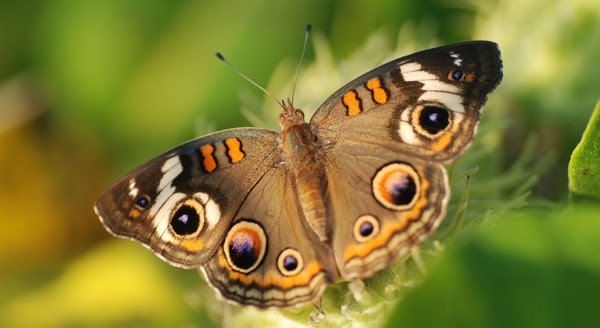 The Common Buckeye (Junonia coenia) is found throughout most of the United States. The first broods are born in the Southern United States and migrate north. Each subsequent generation will migrate further north until they reach the northern most part of their range, which includes the Great Lake States. These are a magnificently marked butterfly with shades of brown, yellow, orange and tan. The eyespots are probably the most spectacular thing about these butterflies. The eyespots are shades of orange, tan and purple ringed with black or brown. Most likely the eyespots are present to scare off would-be predators. They are not a large butterfly, with only a wingspan of up to 2 3/4 inches, but what they lack in size they more than make up for in coloration and human tolerance. These beauties are almost always easy to approach and will often land on us to lick up perspiration.

Look for them in open sunny areas with some bare ground exposed with low vegetation. They are often found along roadsides. The adults will nectar at various flowers. Mating occurs throughout the season. Males will be found basking in the sun on the ground during the day. They will periodically patrol their territory looking for females and chasing off any trespassing males. After mating , the female will lay tiny green eggs on the upperside of leaves in the snapdragon family, plantain family and acanthus family of plants.  No other butterfly in Missouri can be mistaken for this species.

The one photographed here was sitting on a milkweed plant at Maple Leaf Lake Conservation Area.
Posted by Shelly Cox at 5:58 PM