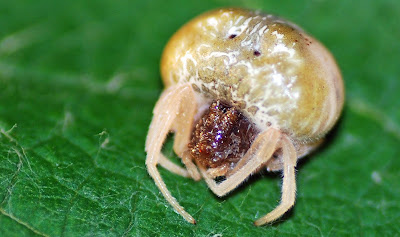 This odd looking little creature is a Bolas Spider (Mastophora). They are found worldwide with exception to temperate Eurasia and Antartica. There are several species throughout North America. Four species are listed as being common in the Eastern United States, they are M. Archeri; M. bisaccata; M. hutchisoni; and M. Phrynosoma. I am unsure which species I photographed here is, but I believe it could be M. bisaccata. They are reported to resemble, superficially at least, snails. That is certainly what I thought this was when I first spotted it stuck to the leaf of a honeysuckle bush in my yard. Other species are bird-dropping mimics and will attach themselves to the upperside of leaves to rest throughout the day. Their ruse is complete with lumps, bumps and proper coloration. Many creatures mimic bird droppings, which I must say is a great disguise, who or what after all would want to feast on Poo?

These spiders are unique in many ways, they do not look like any other spider you are likely to come in contact with. They hold their legs under their body, much like a turtle pulls itself into its shell. They are very calm, and will not try to escape when handled, although the females of some species may emit a foul smelling odor as a form of defense. This particular spider did not do so, thankfully. I handled her quite a lot and she did not seem to be overly disturbed by the experience. Although I must say getting her to show her legs was a feat in and of itself. Perhaps she is modest? She proved difficult to photograph in other ways too, I could not find any decernable eyes on the head of this creature. Seriously, where are the eyes? They are reported to have excellent eyesight and hearing, so where are the eyes? It made focusing on her face quite challenging, when there was NOTHING to focus on. 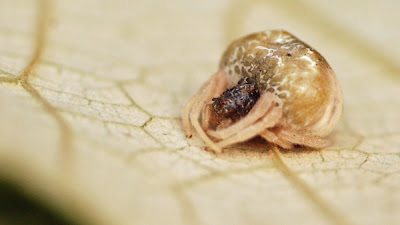 They are classified with Orb Weavers, yet they do not spin webs. They instead have a very unusual way of capturing their prey. The female will sit perched on a leaf, and emit a pheromone that mimics a particular moth species.  One species that they are known to mimic is the Bristly Cutworm Moth. This moth in its caterpillar stage is a known pest of herbaceous plants. This spider helps reduce the number of mating males, thus reducing the amount of damaging offspring. This pheromone tricks male moths in the area into thinking there is a female moth nearby ready to mate. As he flies in to investigate he instead finds himself lassoed at the end of a sticky string that the female spider so expertly flung at him. This silken strand of line has a sticky glob of silk at the end of it, this glob of silk is what earned the spider their common name of "Bolas". A bolas is a type of weapon used by the South American Gauchos to throw at the legs of animals, effectively tripping them. Bolas translates into ball, which is an apt description for the sticky glob of goo on the end of the silken strand produced by these spiders. That ball grabs ahold of the moth and won't let go, and the spider "reels in her catch". This method of hunting has also earned the spider two other common names, angling spider and fishing spider (not to be confused the Dolomedes genus of spiders that are found near ponds and other water sources). Males and young spiderlings do not use a 'Bola" to capture their prey, they instead sit at the edge of a leaf and wait for prey to pass by, they will then reach out and capture their meal with their front legs. 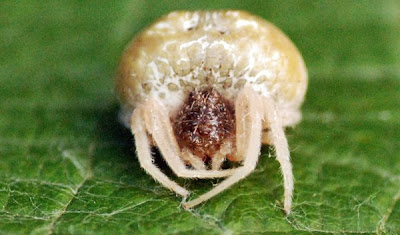 Another unique thing about these spiders is their mating habits. Mating occurs in late summer, then in late fall the female will produce an egg sac. Within this egg sac will be hundreds of eggs. She may produce numerous sacs each containing hundreds of eggs before she herself perishes (except in warmer climates, she may live through the winter). The egg sac overwinters and in the spring the young spiderlings emerge...so far nothing so unique about that right? Well here comes the shocker...male bolas spiders are hatched, and are immediately an adult. They will be approximately 1/16 of an inch in size and are already capable of breeding. Females on the other hand must grow and mature before they are ready to mate. Most spider species require that the male also grow and mature before being ready to mate, not so with this genus of spiders. When fully grown the female will measure approximately a 1/2 inch. These are a small spider and are easy to overlook.

This spider has a venom, but unless you are a tiny moth you have nothing to fear. They are unlikely to bite a human and if they did it would be completely harmless to us.
Posted by Shelly Cox at 12:27 PM