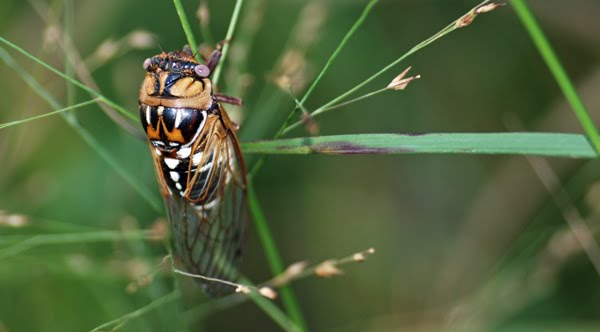 This large caramel colored cicada is the Prairie Cicada (Tibicen dorsata), they are found throughout the Eastern United States. This species is one of the largest cicadas to call Missouri home and are often associated with tall grassy areas, such as meadows, prairies and tall weedy areas.
This is one of the most beautiful species of cicadas, with a gorgeous caramel color trimmed in black. The eyes are large and pinkish in color. 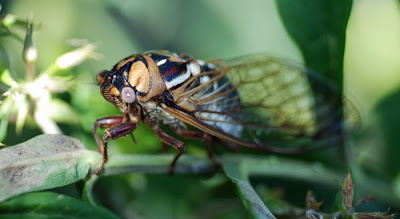 Like all cicadas the males sing loudly to attract a mate. Each species has it's own distinct song, and if you so desire you can learn the songs of each species and will be able to identify them without seeing them.This is similar to what bird watchers do when they learn the songs of birds.

It is not fully known if the adults eat, it can be assumed they may consume plant juices or tree sap. The nymphs live underground and feed on the roots of trees, plants and grasses. This species is considered a Dog-Day cicada and has a one year lifecycle. Meaning they will live as a nymph underground for one year, then climb up from the soil and make their way to a vertical surface where they will shed their outer skin for the last time and dry their wings. Shortly there after they males will begin singing, this typically occurs in the hottest days of summer...or the "dog-days of summer" 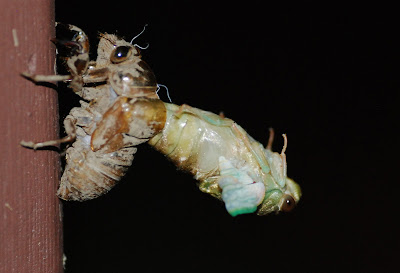 Cicadas are often mistakenly called Locusts. Locusts are a type of migratory grasshopper in the order orthoptera. With summer fast approaching its end, so too will end the song of these loud music makers. I for one dread the silence of their call.....for it means winter is not far away!
Posted by Shelly Cox at 8:15 PM