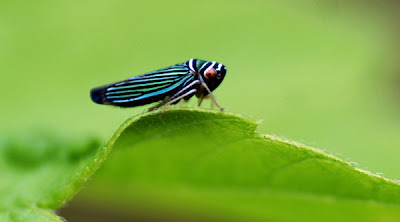 This gorgeous little leafhopper is Tylozygus bifidus. They are beautifully marked with bands of blue-green, white and yellow. The eyes are brilliant red. They are very tiny at about 1/4 inch in length. They are common throughout the Eastern United States, and generally will  be more active during late summer months. If the temperature remains warm they may remain active through October. Look for them near woodlands on the leaves of tall plants. 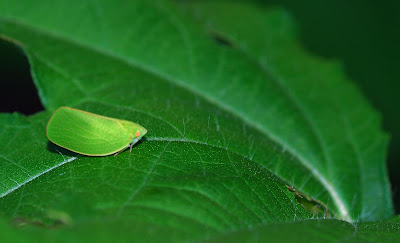 This little green leafhopper is Acanalonia conica. They are found throughout Eastern North America. This species has a pointed head, and two black spots between the wings. This species will also be found in high grasses near timbered areas. They feed on a wide variety of grasses and shrubs. 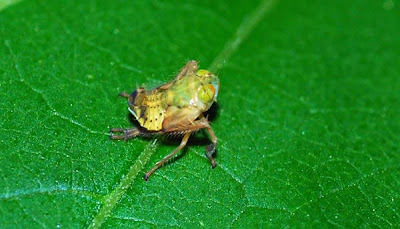 This alien-looking creature is a treehopper nymph. I am unsure of the species, could possibly be the nymph the above species conica.

This species is Nersia florida , they are found throughout the Eastern United States and in California. They look different from traditional leafhoppers with the presence of those clear membraneous wings. They are approximately 1/2 inch in length. Lime green in color with a distinctive black spots just  below the tip of the head. In the first picture of this species the male flew in to check out the female. He walked around her for a bit, then saddled up next to her, and moved until the tip ofhis abdomen was against the tip of hers. Mating commenced. 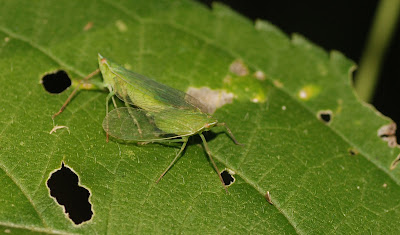 This pretty little hopper is the Candy-Striped Leafhopper or the Red-Banded Leafhopper in the genus Graphocephala. There are 6 subspecies throughout North America and they are often hard to tell apart without close inspection.
Leafhoppers are easily found, but also easily overlooked because of their dimunitive size. Often times some of the most beautiful things come in small packages.
Posted by Shelly Cox at 12:44 PM