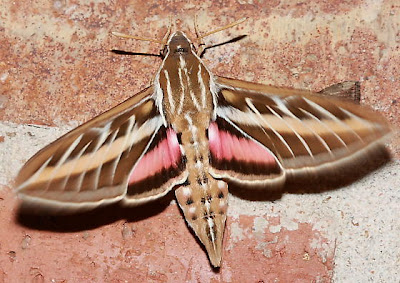 Sphinx moths go by many names, such as Hummingbird Moths, Hawk Moths and Hornworms. The one pictured here (Photo by Sam Houston) is called a White-Lined Sphinx Moth (Hyles lineata). They are an averaged sized sphinx moth with a wingspan up to 3 inches. This particular species is widespread and found throughout most of North America, Central America, West Indies, Eurasia, and Africa. White-Lined Sphinx Moths can be found in a wide variety of habitats, from desert, garden,and meadows, like most sphinx moths they are most active during dusk and nighttime hours. Although they will fly during the day as well. Mating between males and females usually takes place at dusk. Females will lay eggs on a wide variety of plants, which will include, but not limited to, Four O'Clock's (Picture #2), Willow Weed, Evening Primrose, Tomato, Elm, Grape, Purslane, Apple, and Fuschia. 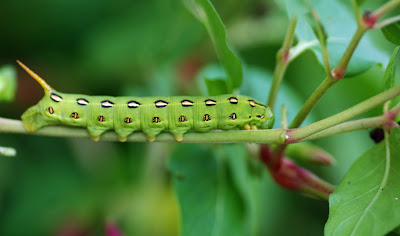 After reaching full size (#3 picture) the caterpillar will crawl to the ground and burrow into a shallow depression in the soil and pupate. They will spend the winter in this stage. Massive population buildups occur which encourage them to head north and populate those regions. 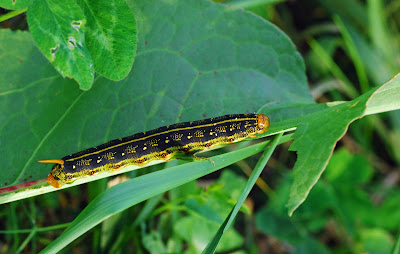 Occasional outbreaks of these caterpillars have caused significant damage to tomato, grapes and garden crops in Utah. The adults nectar at a huge variety of flowers including Columbine, Petunia, Larkspur, Honeysuckle, Lilac, Wild Phlox, Moonvine, Jimpson Weed, Clovers, Bouncing Bet and Thistles. They are often attracted to lights at night, sometimes in large numbers. The whirring sound of their wings is what earned them their other common name of Hummingbird Moth. In Missouri there are probably two generations per year, with the last generation overwintering as a pupa.