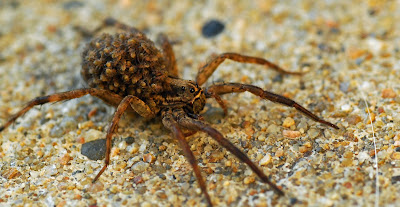 This spider is a Wolf Spider in the Family Lycosidae, Lycos is Greek, meaning "Wolf". There are over 200 known species within North America and most are large at up to 2-3 inches, even larger when you factor in the legs. We have actually had some around our farm that would rival any tarantula you have seen. For quite some time we had a resident wolf spider in our hog farrowing house. We affectionately named her Harry (Or maybe that's Hairy), she was hand-sized and very intimidating to look at. I must confess to carrying a shovel with me when I opened the door to the farrowing house, as she had a habit of sitting right inside the door as if she were waiting for me, or as if she owned the place. This became a game of sorts. I'd open the door, shovel in hand, she'd spot me and run for cover, leaving me to wonder where she was and when she would climb my leg (OK, that never happened, but it COULD have). Fortunately for Harry she never met an untimely demise at the end of my shovel. Spiders just give me the Heebie Jeebies. I can't help it. Now, I try to be brave and leave them alone, but I still get a shiver up my spine when I see one. The one pictured here was on the floor in the office where I work. My boss got my attention by saying something to the effect of, "Look at the size of that spider, and it's Hairy too!" This was not going to do at all, no way, not it my office! I took one look at her and said "That isn't hair, those are babies, don't move or the babies might scatter"! I scooped her into a cup and took her home with me. After capturing her lovely photo, I let her go in the yard. See, I'm not all bad.

Like most spiders Wolf Spiders have eight eyes. They will be arranged in three rows. The first set of eyes will have four in a row; the next two sets are larger and more visible. All eight eyes are apparent in this photo if you look closely. Wolf spiders work hard to rid us of unwanted insects like grasshoppers, moths and flies. They are hugely beneficial and mostly harmless. If you were to handle one (Why you would do this I have no idea) you might get bit. The bite will most likely be painful (as it should be if you are silly enough to pick one up), but harmless.

Most Wolf Spiders live on the ground and roam around hunting for prey, usually at night. Their coloring helps camouflage them, which gives them protection from predation. When they are ready to mate, males will perform a courtship ritual that involves him waving his pedipalps (modified legs, turned fangs) around. After mating, the female will spin a spherical egg sac which will contain her eggs. She will carry this sac around with her attached to her spinneret. When the babies hatch they will ride around on moms back (pictured) until they are old enough and ready to leave and be on their own. There is only one genus of Wolf Spiders known to spin webs, most live in holes under rocks, vegetation and many have no hiding place at all.

As creepy as spiders are, they serve a great purpose, and if you take time to really look at them, there is a certain beauty in their creepiness. The eyes are fascinating, the colors are understated yet beautiful. If you can get past the eight hairy legs and the fangs, you've got it made!