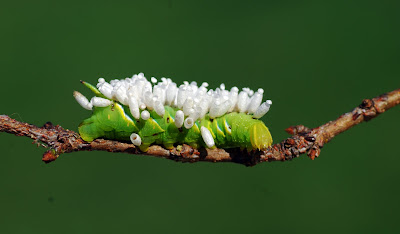 This unfortunate Sphinx Moth caterpillar fell victim to a parasitizing wasp called a Braconid Wasp. This is the first time I've ever seen anything like this and I was taken aback by the severity of the infestation. I was very surprised that the caterpillar was still alive and crawling around. I've been unable to get a positive ID on the caterpillar so I have no idea what moth it would have grown up to be. It obviously had been parasitized by the braconid at a very early stage as the caterpillar was only about an inch and a half long.
Braconid wasps are notorious for using sphinx moth caterpillars as hosts for their offspring. The female will deposit her eggs, using a very tiny thin ovipositor, under the flesh of the caterpillar. These eggs hatch and the tiny larva will eat their way through the insides of the caterpillar. Once the parasites have reached their full growth they will emerge through the skin of the caterpillar and form cocoons. They will remain in these little white cocoons for several days, finally emerging as adults to carry on the process. The unfortunate victim, the caterpillar, will perish. In the picture above you can see the tops open on the cocoons, which means these wasps have already fled the scene.
As gruesome as this looks and sounds, it is just one more way that populations are controlled by Mother Nature. The wasp is just doing what it is designed to do, survive.
Posted by Shelly Cox at 10:32 AM