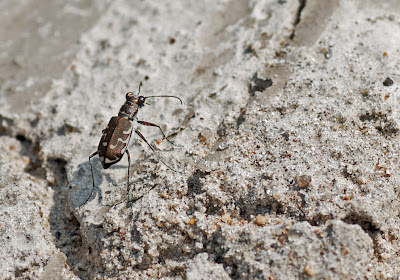 I had some difficulty in identifying this long-legged beetle. I sent this image to Ted over at Beetles in the Bush, and he identified it as the Bronzed Tiger Beetle (Cicindela repanda).  So many of the tiger beetle species look similar, sometimes it can be difficult to tell one species from another. If you have not visited Ted's blog you should do so, he offers a wealth of information on many subjects, his favorite being beetles, especially it seems Tiger Beetles. The bronzed tiger beetle is quite common and can be found throughout most of North America. They measure roughly 1/2-3/4 of an inch in length. They are brown with metallic reddish or coppery reflections. The elytra (wings) contain cream or white colored marking, in fact I think the markings resemble muscial notes. This species is associated with sandy soil, especially near rivers or streams. The one pictured here was photographed at Elrod Mill Conservation Area on the Platte River bank. They will also be found in clay soil, gravel and other areas free from vegetation. Once the females have mated they will dig shallow depressions in the soil and deposit eggs singly in each chamber. After hatching, the larvae will dig itself a burrow and will remain there throughout its development. They feed on insects that venture to close to the burrow opening, such as ants, or other small invertebrates. The adults also feed on other insects, but one unique characteristic of this species is it's taste for fruit. They are the only tiger beetle reported to feed on anything other than insects. Because of their preference for living near water, they are also called Common Shore Tiger Beetle. So if someone asks you if we have tigers in Missouri, you can most assuredly tell them"YES we do....the six-legged variety". See how long it takes them to figure it out.
Posted by Shelly Cox at 6:18 PM