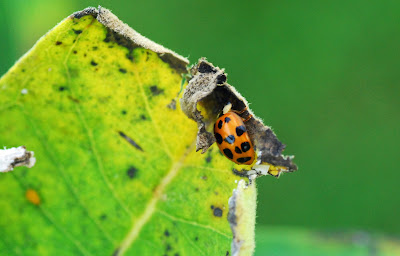 The name of this little ladybug is a mouthful; to say the least. They are called Multi-Colored Asian Lady Beetle (Harmonia axyridis), or just Asian Beetle as many of us refer to them. They are native to Asia as the name suggests, and were brought to the United States in 1916 to help control Aphid populations in greenhouses. A few of these beetles escaped the greenhouses and found this new country much to their liking. So much so that they are now found throughout all of the United States and most of Southern Canada. On top of those that escaped confinement there were enterprising individuals who felt that our own native species just weren't doing their job adequately enough to suit them, so in their infinite wisdom they released these beetles in various locations all across the United States. In effect they succeeded in controlling the aphid populations, but they also made things very difficult on our native lady beetles, which just couldn't compete with a new, more aggressive interloper. Consequently many of our own lovely  ladies have disappeared in parts of their range and are severely declined in other areas. Not all ladybugs are created equal....Asian lady beetles amass in huge numbers in the fall and invade our homes, garages, and other structures, looking for a place to spend the cold winter months. Asian ladybugs also give off a musky sent when disturbed and can give a little nip when handled. Sometimes they will land on your arm and bite for no apparent reason, other than they feel like it. 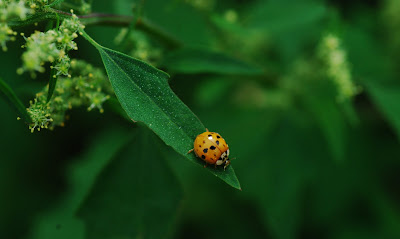 Asian lady beetles are highly variable in color, ranging from orange, red, reddish-orange and even black with red splotches out in the western most part of their range. Sometimes they are spotted, but many are not. In Missouri these beetles have a white pronotum (thorax region) that contains four black spots, that vary from small to large, and can sometimes blend together to look like a "W" or "M".

Mating takes place at all times during the late spring and summer. I've seen larvae as late as September, feeding on aphids. The tiny larvae look like miniature alligators, they are voracious eaters and consume untold amounts of aphids, thrips, mites, moth and butterfly eggs and other soft bodied insects. It typically takes them a total of four instars(molts) to reach adulthood. In the last molt they will enter into a pupal stage. This pupa is an elongated dome shape attached to leaves by the spikey remains of the last molt clinging to one end. Once they reach adult size they may live up to 90 days, depending upon food sources available and temperatures. In Missouri there are probably two generations each year. 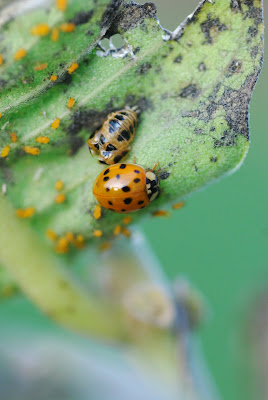 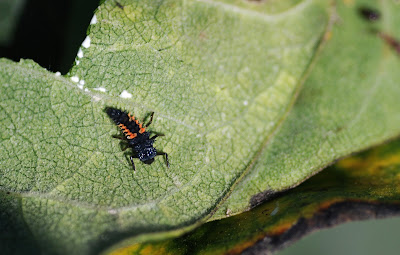 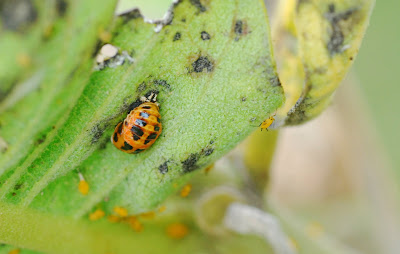 For many of us, a Ladybug is a Ladybug. I suppose in some ways this true, they certainly look similar. I can't say that I dislike these Asian Lady Beetles, they are serving a great purpose by ridding us of harmful aphids and other plant eating insects. I only wish it didn't come at such a high price for our lovely native ladies. 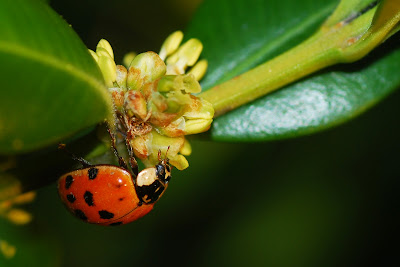 Im sure many of you have been reading about a worthwhile project that Cornell University is sponsoring. Cornell is famous for it's citizen scientist outreach projects. We are all familiar with the Great Backyard Bird Count, and Frog Watch. This newest project called "The Lost Ladybug Project" encourages individuals to explore their parks, natural areas, backyards and anywhere else that you are likely to find ladybugs. Camera in hand, photograph any all ladybugs you find. Take those pictures and upload them to Lost Ladybug Project. Give your best guess as to what species you think you've photographed. They compile this information and use it to determine how populations of individual species have changed, including their range, and numbers. It is truly a worthwhile project and fun for anyone who enjoys getting outside. 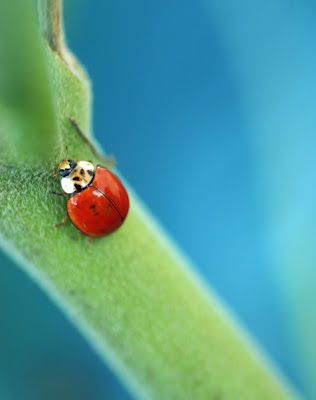