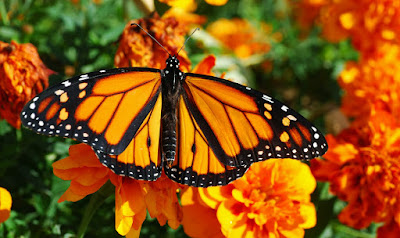 Monarch (Danaus plexippus) Butterflies are easily the most recognized butterfly in the World. They are found throughout all of the United States, Southern Canada, Australia, Indonesia, South America, Mediterranean Countries and numerous other Pacific Islands. Their bright orange and black coloring brightens any landscape, and it is common to see them fluttering about meadows, marshes, fields, cleared roadsides and backyard gardens nectaring at a wide variety of flowers. Some Monarchs can be quite large with a wingspan bordering on 5 inches, still others are small at just over 3 inches. Males have distinctive scent glands on their hindwings (Visible in the first picture as two black spots).
The Monarch Migration is probably one of the most incredible phenomena in the animal kingdom. These remarkable butterflies will migrate to Mexico, Cuba or Southern California. Incredibly enough not one of these butterflies makes the entire round trip journey. After leaving their winter grounds these butterflies start their northward migration laying eggs as they move North. The eggs hatch, and shortly after the adults perish. These new caterpillars feed on the milkweed plants where they hatched. Once reaching full size they will pupate and in about 2 weeks the new adults will emerge. These new adults move further north, and lay eggs as they go. This cycle repeats itself over and over along their journey. Many of these butterflies will reach Canada. In autumn these butterflies will begin their journey southward. Many will overwinter in Mexico and still others will migrate to Cuba or Southern California. They make this journey without ever having traveled these routes before. It is not uncommon for these migrations to be in such large numbers that they will blacken the sky. Nobody knows why they do this, or how they know to do it. These monarchs will live 8 months in the cold mountainous regions of Mexico. This autumn generation is the only generation to live this long. Spring and summer adults only live a few weeks.
If you want to attract these butterflies to your yard, plant varieties of milkweed. This is includes Swamp Milkweed, Common Milkweed and Butterfly Weed. Milkweed has long been considered toxic to humans, this is not so. There is a great book entitled "The Foragers Harvest" by: Samuel Thayer, in his book he discusses all sorts of wild edibles that he has eaten. One of these is the common milkweed, with no adverse affects. Being the person I am, I had to try it. I broke a leaf off and sucked on the milky white fluid seeping from it. It had a mild taste, and almost glued my lips together! It may not be toxic, but I'm thinking there would be a market for glue made of the stuff! So rest assured you are safe to plant milkweed in your garden. Now this cannot be said for Monarchs, they use the milkweed to their full advantage, the toxins the plant contains helps aid the Monarch against predation. Birds, other insects and other creatures that might decide to dine on this butterfly would find it terribly distasteful. All stages of the Monarch's growth is toxic, from newborn caterpillar to adult.
Another common butterfly that uses the Monarch's coloration to their benefit is the Viceroy (Limenitis archippus). They look almost identical to the Monarch, this mimicry gives them protection from predation. If you look like something distasteful, chances are a predator won't take a chance and try to eat you. After all a belly ache is  no fun at all! 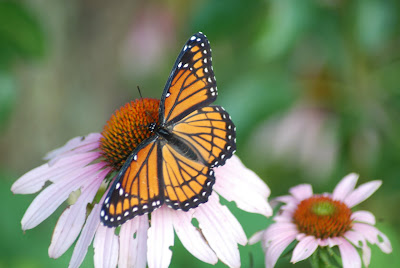 This is the Viceroy, one way to tell the difference is to look for the black line that runs through the hindwings, making a smile face of sorts. They are also usually smaller than Monarchs. The body of the Viceroy is not speckled with white like the Monarch either.

These colorful caterpillars brighten up any landscape, and try bringing some milkweed inside along with a few caterpillars and watch them munch away. In about 2 weeks they will form a cocoon.The chrysalis is unmistakable, light green with a row of metallic gold dots.  Two weeks later they will emerge as a full fledged adult ready to be released to the World. It is said that if a newborn baby ate as much as a caterpillar, he would weigh as much as a hippopotamus in a single weekend! That's a lot of leaves! 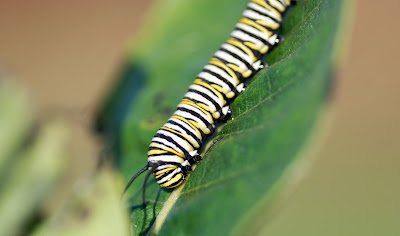 A fun project to participate in is one sponsored by the University in Manhattan, Kansas. Called Monarch Watch. This worthwhile project keeps track of Monarch Migrations, population numbers, and over all habitats for these lovely flying flowers. In the spring or summer you can order a kit from the University Monarch Watch at this link. The cost is $15.00. The money goes to aid in research. They are hoping to answer the Mysterious questions of "Why do Monarch's Migrate"? "How do they know where to go"? as well as ensure that the general public is educated and the habitats are protected for these lovely butterflies for many generations to come. 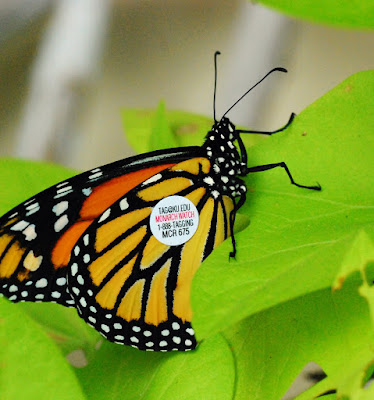 My first tagged Monarch of the year. I found a caterpillar a few weeks ago, brought it into the house, and overnight it formed a cocoon. In two weeks the male emerged, I tagged and released him on Saturday, September 26, 2009.  It was cool day, and he sat for over an hour on a plant on the front porch. I finally took pity on him and moved him to the sun. After about a minute he took flight and headed directly south, amazing!!
Posted by Shelly Cox at 4:43 PM