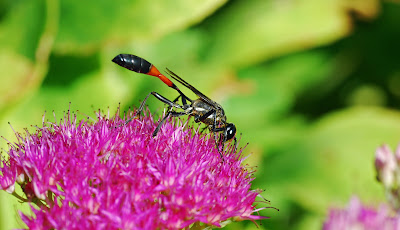 This large unusual looking wasp is called a Thread-Waisted Wasp (Ammophila maculiventris). This particular specimen measured 1 1/2 inches. They are found throughout North America in a variety of habitats, including meadows, prairies, backyard gardens and anywhere else that flowers can be found. The adults dine on nectar and pollen from many types of flowers, like the sedum pictured here. This late in the year it is slim pickin's as far as flowering plants go in Missouri. The air is changing dramatically and from all the changes I've been seeing it is only matter of time before the first frost hits. Once that happens about the only insect activity we will see is the Multi-Colored Asian Lady Beetles and the Boxelder Bugs. All these unusual wasps will disappear. I wonder where they go? Do they hibernate in a state torpor? Do they perish and leave behind eggs to hatch the following spring? Do the larvae overwinter, and emerge as adults once warm weather returns? I could not find any information to answer those questions. If anyone knows, please comment.


These are solitary wasps, which basically means they do not rely on a hive or colony for their survival. After mating, the females will dig a shallow depression in the soil. She will then seek a caterpillar, that she stings to paralyze it. Flying back to the burrow she created, carrying the paralyzed caterpillar, she will deposit it in the hole and lay an egg on it. Once the egg hatches the young wasp larvae will begin feeding on the caterpillar provided by its parent. It takes several weeks for the wasp larvae to consume the entire caterpillar, once it has the larvae will pupate and emerge later in the summer as a full fledged adult. These wasps are expert hunters, and are designed with carrying large prey (caterpillars) in mind. They resemble the Sikorsky Skycrane Helicopter.