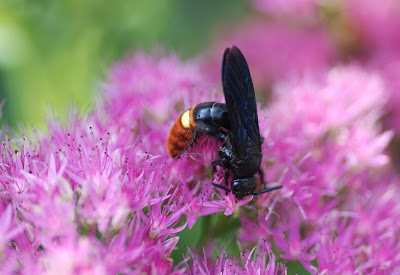 This pretty little wasp is called a Blue-Winged Wasp (Scolia dubia). They are found in gardens, backyards, meadows, prairies, and along roadsides all throughout the Eastern United States  and in California. Identifying these wasps is easy, they have blue wings like their names suggests, but one key characteristic that makes it impossible to mistake them for any other species are those yellow patches at the top of the orange segment of their abdomen. Blue-Winged wasps are relatively small at about one inch or in some cases less. The adults nectar at flowers, like the one pictured here who took a liking to some Sedum that was in full bloom. Mating occurs late in the spring, and they engage in an elaborate mating dance. They will fly low to the ground in a figure 8 or "S" pattern. This is repeated numerous times, until mating finally occurs. Once mated, the female will dig a burrow into the ground and provision it with the grub of a Green June Beetle or Japanese Beetle. She does this by detecting the grub underground, digging down until she locates it and then stings it to paralyze it. Once paralyzed she will carry it back to the lair, and deposit an egg on it. When the egg hatches, the young larvae will begin feeding on the grub, which is very much alive, it just cannot move. Once the larvae reaches its full size it will pupate in a cocoon of sorts that it constructs out of the body of the grub. The wasp will overwinter in this stage and emerge the following spring. These wasps are hugely beneficial because of their preference for using June Beetle and Japanese Beetle grubs to feed their offspring. They help keep these harmful insects in check. In large numbers these wasps can be intimidating, much like any stinging insect in large groups. This species is calm and almost completely harmless. The only way you are likely to get stung is if you antagonize it. The draw back to having these wasps in large numbers, is that it could indicate you have an overpopulation of beetle grubs. They are a very attractive wasp and should be encouraged in the garden for the services they provide.
Posted by Shelly Cox at 12:35 PM