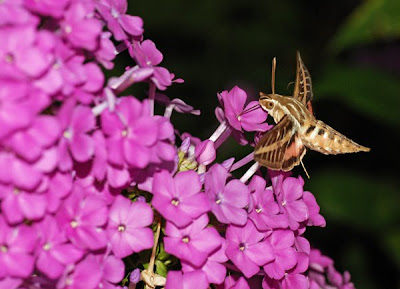 This pretty moth is a White-Lined Sphinx Moth (Hyles lineata), they are found throughout much of North America, as well as Central America. These are very common sphinx moths in Missouri, and are often mistaken for hummingbirds as they flit and flutter around flowers nectaring at the blooms. Which has also earned them the name of hummingbird moths. White-lined sphinx moths are medium sized with about a 3 3/4 inch wingspan. The upperwings are olive-brown with lighter brown edges There is a white line running from the wingtips to the base, there are also many white lines along the veins, which is where their common name is derived from. 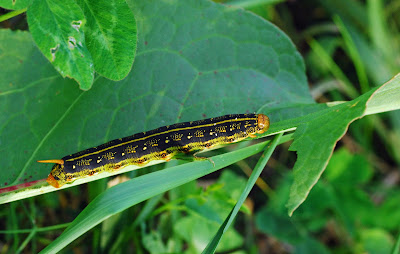 The caterpillars are quite large when mature and may reach lengths up to 4 inches. They vary somewhat in appearance, but generally have a black back. They will feed on a wide variety of hosts including Four O' Clocks, Apple, Fuschia, Purslane, Evening Primrose, Grape, WillowWeed, Elm and Tomato. The adults take nectar from flowers, like wild sweet william. They are common in backyard gardens, but will also be found in desserts as well as other Rural, and Suburban areas.
Posted by Shelly Cox at 2:42 PM