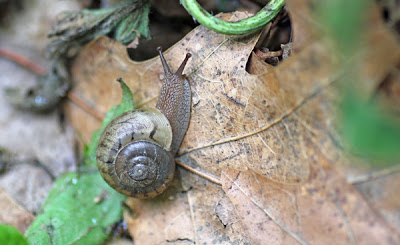 This little mollusk is a brown garden snail (Helix aspersa) and they are native to Western Europe, the Mediterranean including Egypt and the British Isles. This is possibly the most common of all the gastropods and are found Worldwide. It was first brought into the United States in the 1850's when they were imported into California as a delicacy. As is often the case, several escaped and found the environs to their liking and now they are found throughout the United States. They quickly establish themselves in new territories and are frequently transported into new countries via shipments of plants. This snail is considered an edible species of snail and are often enjoyed in dishes such as the French dish Petit gris as well as Escargot a la Bordelaise. This snail is even being used in skin creams and gels designed to prevent or cure dry skin, acne, scars and wrinkles. This is most popular among the Latino community. So while it is edible and described as being delicious, in most regions it is considered a pest and control measures are used to eliminate them. Anything from traditional pesticides, to garlic and wormwood is used to deter these snails. Copper is also used to repel this snail, just wrap a band of copper around your beloved trees or shrubs and the snails won't climb them. 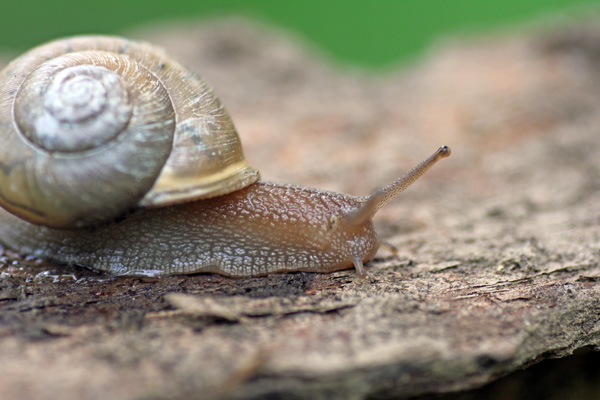 This species is often kept as a pet in terrariums. I brought two home with me to try keeping them. We found dozens of these snails while hiking Sunbridge Hills Conservation Area. They were crawling all over the trail and I was afraid that I was going to crunch them under my feet. I sat on my bottom and just watched them moving and feeding. They move slowly, barely more than a centimeter per second, which would equal approximately 50 yards in an hour. Considering the average human can walk 50 yards in two minutes or less, it kind of brings into perspective just how slow these little creatures are. They have a strong sense of place and can find their way back to the same hibernation site. 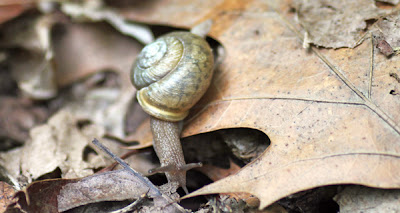 These snails are small to medium in size with a diameter of up to 1.5 inches. The shells are predominantly made up of Calcium Carbonate and contain 4 or 5 whirls. This is the same substance used in antacid tablets. Excessive consumption of this substance can actually be harmful to the human body. That being said....if you are outside stranded and have a tummy ache, does that mean you could pop a snail shell in your mouth and viola....no more stomach ache? The body of the snail are brownish-gray and covered in a slim. When disturbed they will retreat inside their shell, much like a turtle does. They have two sets of tentacles, the larger of the two sets are used as sensors to "see" their surroundings. The smaller set located underneath the first pair are used for tasting their surroundings. They can retract these tentacles into their bodies if disturbed. Their mouth is located beneath the tentacles and contains a tongue-like radula that is used to scrape and maneuver food stuff around. They are herbivores and feed exclusively on plants like grains, ornamentals, grasses, leaves of trees, and in captivity  they do well on dark greens. 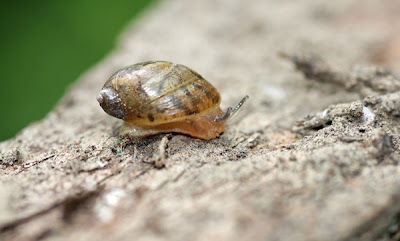 Snails are hermaphrodites  and are capable of creating offspring through self fertilization. They can produce both eggs and sperm. This is partially why they are so successful and spread their range so rapidly. Just think about it.... if you lack of a suitable mate....no problem, just fertilize yourself...problem solved. Usually fertilization takes place through traditional mating, well sort of traditional....if cupid-like love darts could be considered  traditional.
Mating takes place after an elaborate courtship ritual. The two snails circle around each other for up to six hours, touching with their tentacles, and biting lips and the area of the genital pore, which shows some preliminary signs of the eversion of the penis. Each snail manoeuvres to get its genital pore in the best position, close to the other snail's body. Then, when the body of one snail touches the other snail's genital pore, it triggers the firing of the love dart, the darting can sometimes be so forceful that the dart ends up buried in the internal organs. It can also happen that a dart will pierce the body or head entirely, and protrude on the other side. After both snails have fired their darts, the snails copulate and exchange sperm.
A snail does not have a dart to fire the very first time it mates, because the first mating is necessary to trigger the process of dart formation. Once a snail has mated, it fires a dart before some, but not all, subsequent matings. A snail often mates without having a dart to use , because it takes time to create a replacement dart. In the case of the garden snail Helix aspersa, it takes a week for a new dart to form.
In this species the love dart is covered in a mucus that contains a hormone-like substances. This substance contracts one part of the female half of the reproductive system of the snail that is struck by the dart, this allows most sperm to survive, which increases the chances of a successful mating. Females will lay up to 80 white eggs two weeks after mating. She is capable of producing 6 clutches of eggs, each containing 80 eggs. With this ability to produce so many offspring it is easy to see how these snail could take over a garden. In large numbers they would be detrimental to your garden production.
If you are interested in learning more about snails.....let me recommend an excellent book by David George Gordon. He makes these misunderstood and often reviled creatures seem amazing and interesting. 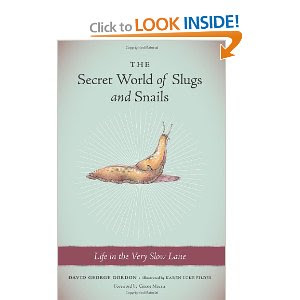 The Secret World of Slugs and Snails: Life in the Very Slow Lane