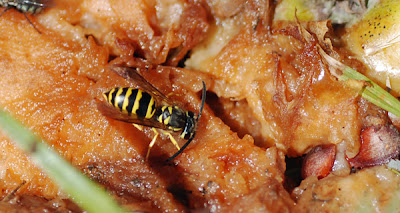 Yellow Jackets in the genus Vespula are found east of the Great Plains and are very commonly seen in Missouri. They are often mistaken for Honey Bees because of their small size and similar coloration. Yellow Jackets aren't bees at all,but rather wasps and are more closely related to Hornets. Honey Bees have furry bodies, whereas Yellow Jackets are almost completely hairless. These are the little wasps that show up near garbage cans, picnic tables, at the ball game and anywhere else there are sweet treats to be found. They will often be crawling all over the rim of your pop can, or walking their way through your caramel covered apple as you sit outside to enjoy a nice fall day. These guys are typically much more aggressive than honey bees, and like honey bees it is only the females that sting, but the similarity ends there. These little wasps can sting repeatedly and will sting in large number if provoked or threatened. Like all stinging insects they use pheromones to communicate and once irritated they will send out an alarm via their pheromones. This chemical perfume alerts any other yellow jackets in the area and they are immmediately on the defensive, and will come to the aid of their sister wasp. The ones pictured here were photographed on my husbands uncles farm. The apples had fallen from the tree and fermented in the autumn sunshine. They were attracted to these apples like a drunken man to a bottle of wine. These little wasps were completely intoxicated. They were actually stumbling on the ground around the apples, and looked for all the world as if they were going to pass out. The addiction to this apple alcohol was so powerful they seemed unable to stop themselves from going back for more. This intoxicated state made them quite docile and I was able to coax them onto my finger where they proceeded to walk in very crooked lines. They seemed to have lost the ability to fly, or even to realize they could. Perhaps that was for the best......a bunch of drunkin wasp flying in all directions crashing into every available surface might have made for comedic entertainment, but I'm pretty sure not to healthy for the wasp. 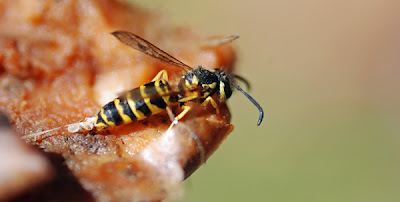 When these wasps aren't invading our food and drinks; or getting drunk on apples they are busy foraging for nectar for themselves or insects to feed their sister larvae back in the nest. They will capture a likely looking insect and masticate the unfortunate victim, and feed the larvae the chewed up bits of bug. 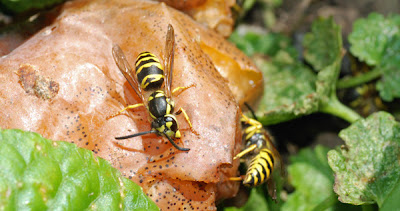 In the fall young queens will leave the hive on their maiden flights. Any males in the area will pick up her scent and compete to mate with her. Once she is mated the male will die shortly thereafter. Each member of her colony will perish as the night time temperatures drop to freezing. 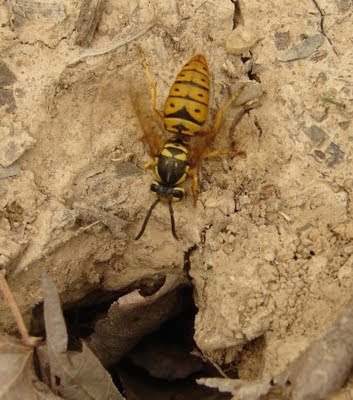 (Image of queen taken by Steve Scott)
The only Yellow Jackets that survive the winter will be the newly bred queens. They will seek sheltered areas under leaf litter, in hollow trees, in the cracks of foundations or behind the loose bark of trees. In the spring as the weather warms she will become active. She has one thing on her mind.....start a new colony. She will begin building a nest and laying eggs in the hexagon shaped cells. She will feed and care for her offspring until they reach maturity. These mature yellow jackets will then take over the care of the offspring of their queen-mother, as well as expanding the hive and keeping it clean and free of dead bodies. The hive will grow rapidly and be heavily populated with several hundred wasps. They will build these nests under hay bales in barns, in the ground, or anywhere else that seems protected and safe. 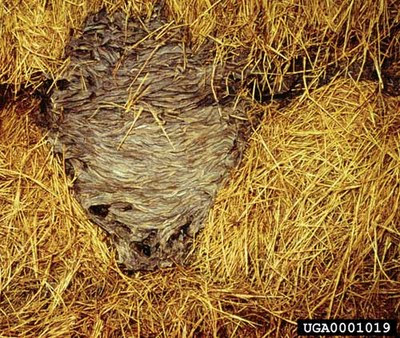 (Internet Image)
﻿There is really no need to fear these insects, they are normally very docile while out foraging for food. They are only prone to attack if they perceive you as a threat, or if you happen to come to close to the hive. They will protect their hive, siblings and queen at all costs.
Posted by Shelly Cox at 9:50 AM