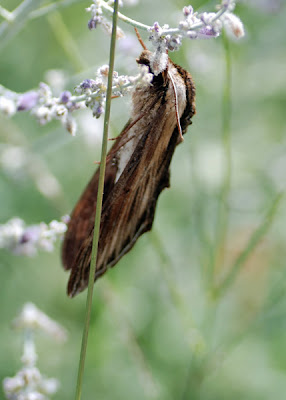 Laurel Sphinx Moths are found throughout Eastern North America. This one was photographed in August at work. It had been attracted to the mercury vapor light pointed out our flag. The next morning it was hanging from the Russian Sage. These are a modestly beautiful moth, certainly not extravagant in their coloring, or in their size, yet pretty just the same. They are sometimes called the Fawn Sphinx, which I assume comes from their fawn-like coloring. They are yellowish-brown in color, with dark margins on their forewings. There is also a bold white line on their forewings, and the hindwings are tan with a dark border. Their wingspan is up to 4 1/16 inches. 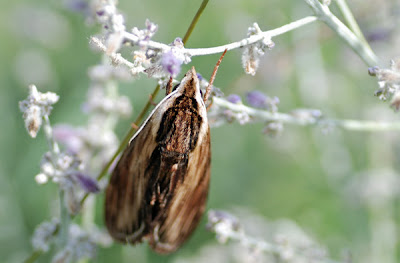 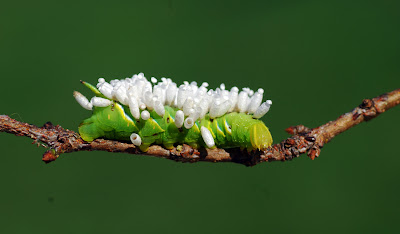 The caterpillars of the laurel sphinx feed on lilac, privet, ash, fringe tree, and plants in the olive family. Adults will nectar at honeysuckle, and bouncing bet. They will be seen hovering over the blooms at dusk and late evening.

To say that these wasps are terrible is to say that the moths are good. In the case of these creatures neither is an apt description, they are merely doing what they do best, and that is survive by any means possible. In the case of the moth death is eminent, but the wasps will go on to carry out future generations. For me, as a naturalist and lover of all insects it was a rare and exciting glimpse into their lives.
Posted by Shelly Cox at 11:03 PM