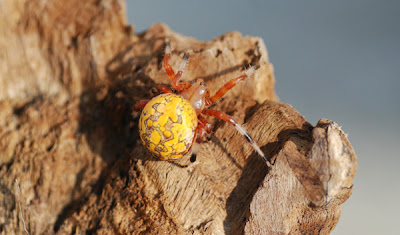 Marbled Orb Weavers (Araneus marmoreus) are in the family Araneidae and there are 1500 species in this genus. They are a brightly colored orb weaver found hanging in large orb shaped webs from whence they get their common name of orb weaver. These colorful spiders are generally bright yellow with grayish-black markings on their abdomen. The legs are typically reddish with black and gray banding.
Although they can range in color from pale yellow, pale orange, bright orange, beige or even white with black markings. The pattern will usually vary by species as well. 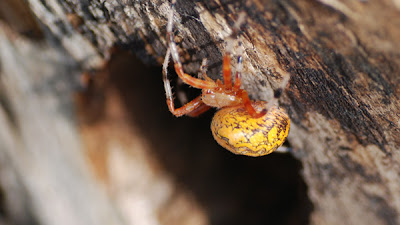 They can be found from Alaska to Newfoundland, then south to Oregon and Utah, then further south to Southern Texas and eastward to South Carolina. They are common in Missouri and this particular specimen was found in St. Joseph and brought into my office for identification. It was one of the prettiest spiders I've ever seen. I captured several images of it before turning her loose, hopefully to find a mate and produce offspring. 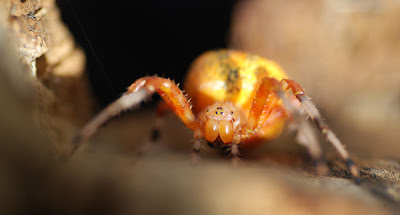 They're almost always found in moist deciduous woodland habitats or at the edges of woodlands in August, September and October. These spiders construct a retreat made of silked together leaves in an upper corner of the web. During the day she will hide in this retreat holding onto a signal line that runs to center of the web. 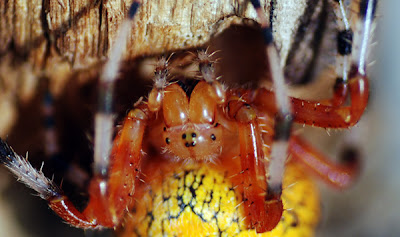 This species feeds on large prey insects such as grasshoppers, cicadas and beetles. Mating takes place in early to late fall. The female will create egg sacs in October and die shortly thereafter. These egg sacs may contain hundreds of eggs and will overwinter. The spiderlings will be born sometime the following spring. 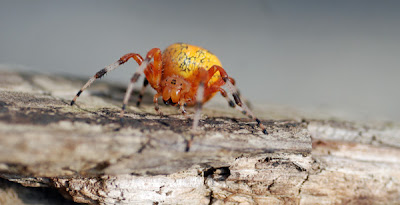