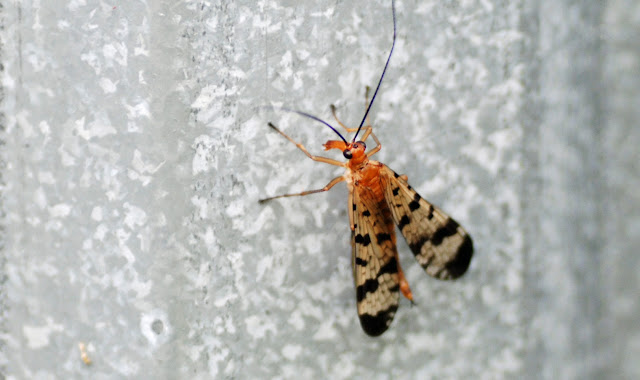 Scorpionflies in the genus Panorpa are in no way related to scorpions or flies. They get their name from the males scorpion-like appendage at the tip of their abdomen. They could have just as easily been called elephantfly....just look at the schnoz on these insects. They do not sting or bite, in fact they cannot hurt humans at all. The first and second pictured here were photographed on our farm, and they are quite common around here. 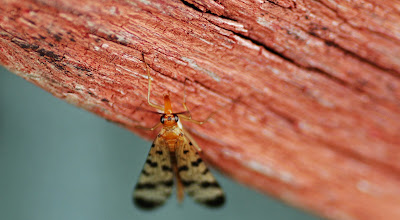 There are 55 species throughout the Eastern United States and Canada. Most have black patterned wings that are held back over their body. They have a short fluttery flight that rarely takes them more than a few feet away at a time, making them very easy to approach. 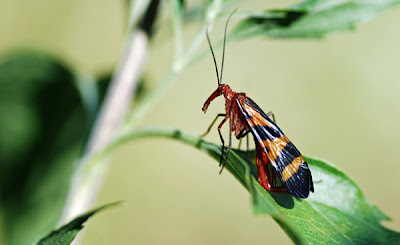 This larger species is Panorpa nuptialis, they may reach lengths up to one inch or a little more. This particular species is found in South Central United States. They are found from central Missouri southward, and I photographed this one at Truman Lake State Park near the lake on some flowers. This seemed to be the most common species of these insects in the area, and I spotted well over a half dozen of them during our two day stay all within 1/2 mile radius. They are omnivores and feed predominantly on insects. They will sometimes feed on pollen or nectar. Males will even occasionally offer females a nuptial gift in the form of a juicy insect morsel. Males also emit a pheromone from their abdomen. The females may be attracted to the powerful chemical cocktail that the male produces or perhaps his gift is what entices her.Most human females appreciate a good smelling man bearing gifts, seems these female scorpionflies do as well. 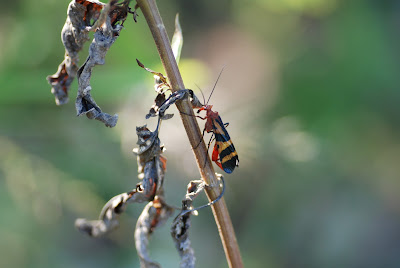 Mating will occur as the female feeds on her tasty gift. Males will sometimes pose as females in order to "steal" the potential nuptial gift meant for an intended mate. This gives the male a leg up in the mating game. Females lay their eggs in cracks or crevices in the soil. The larvae feed on dead soft-bodied insects. They will emerge as adults sometime in the fall, and will be found from September through November.  Look for them on low shrubs and ground cover in densely-vegetated woodlands, often near water; grasslands; cultivated fields and forest borders. The adults are usually seen resting on leaves in shaded areas less than three feet from the ground. 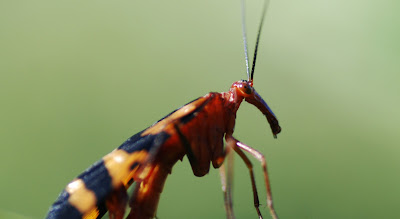