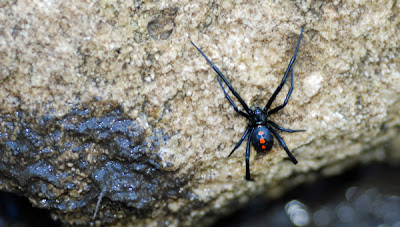 Black Widows may be one of the most feared spiders in North America. Some would say with good reason, after all they do have venom that is ounce for ounce more toxic than a rattlesnake, and they crawl around on eight legs which completely creeps most people out. This particular species is the Northern Black Widow (Latrodectus variolus) and was photographed at Truman State Park. They are shiny black with a broken red hourglass on their lower abdomen. Northern Widows often have a row of red spots on the back of their abdomen as well (as shown here). While walking the glades, and turning over rocks we found this beautiful female hiding under a rock. She was large with a legspan approximately the size of a quarter. She was very docile and sat perfectly still while I photographed her. I wished I would have had a container to place her in to be able to keep her. It would have been nice to show the public who visit our office exactly what one looks like. While their bite is highly venomous and extremely painful it is rarely deadly except in the very young or the elderly. They deliver very small doses of venom with a bite, which is a good thing. If they delivered as much venom as a rattlesnake we would all be in danger of not recovering from a bite inflicted by one of these awesome spiders. 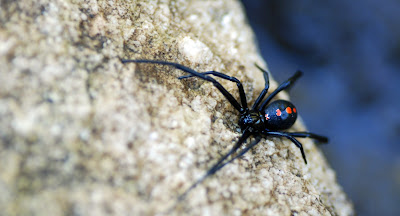 Black Widows are secretive and elusive spiders. This species generally builds their webs under rocks or logs in open woodlands. If approached they are quick to run for cover. These are not aggressive spiders and will only bite if provoked or caught between your skin and your clothing or if accidentally touched. Males are incapable of biting, it is ONLY the female who bites. The venom contains a powerful neurotoxin and bites can and often do lead to stomach upset, cramps, abdominal pain, sweating, headache, muscle tightness or soreness, delayed pain at the bite sight, and swelling of the hands, feet or eyelids. Swelling at the sight of the bite is rare. Reactions to their bite may last for several days and often require medical treatment for relief. Most human fatalities due to Black Widow bites occur in the Southwestern United States where larger populations of these spiders exist. 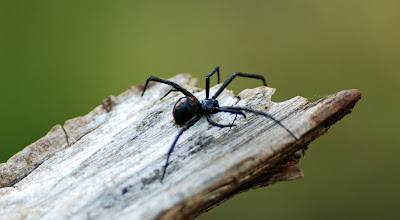 These are extremely beautiful spiders, and part of their mystic and beauty may be the fact that they are so highly venomous and potentially dangerous. There is no need to be afraid of these spiders, merely be aware of their possible hazard and avoid contact with them if at all possible. If you have them in your basements, sheds, cellars or anywhere you may frequently encounter them, you might want to consider removing them, especially if you have small children at home. When cleaning in areas where they have been seen always wear gloves. Use caution, but no need to live in fear. They generally never leave the web except when looking for new place to construct their web. Because of their habit of staying close to their web, encounters by humans are rare in Missouri. This particular species is most often found away from human dwellings which makes it even more unlikely we will come in contact with one. I was very excited  to have found one and to get the opportunity to photograph one and it was under the very first rock I flipped. I was flipping stones, with no gloves on, so I was lucky to not have been bitten.

There are two species that live statewide in Missouri; the first and most common in southern counties is L. mactans (Black Widow) and the L. variolus (Northern Black Widow) is found in more central and northern counties. We encountered both species at Truman Lake, I found two L. Mactans within their webs at the bathhouse. Each time I approached I could only catch a short glimpse of them before they darted behind a trim board that their webs were attached to. They were smaller than the Northern Widow that I photographed here. 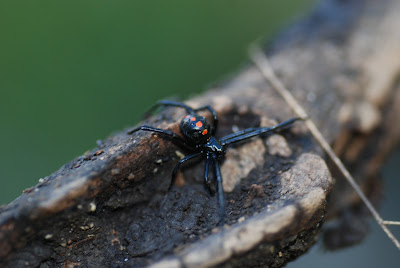 The good that these spiders provide by eating untold amounts of insects far outweighs any danger that may exist from this spider.
Posted by Shelly Cox at 9:50 PM