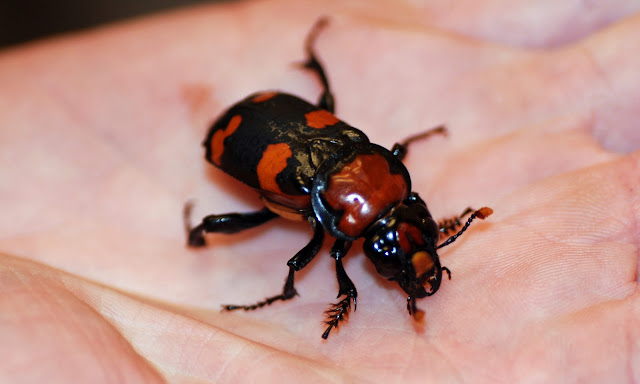 American Burying Beetles (Nicrophorus americanus) in the order Coleoptera are large carrion beetles that are believed to have disappeared from Missouri. They occur in eight states right now with limited populations; including Rhode Island, Arkansas, Nebraska, Kansas, South Dakota, and Oklahoma. Ohio and Massachusetts have reintroduced populations that are being monitored. This is a far cry from the 35 States that they were reported to have originally been found.
They were listed on the Federally Endangered Species list in 1989, but as early as 1983 they were listed with IUCN (International Union for Conservation of Nature) as a species in peril. There seems to be no clear-cut answer as to why they are disappearing from all but 10% of their original range. Most claim it is habitat loss, which may make some sense. They seem to prefer grasslands and open understory in Oak and Hickory forest. With much of this land being cleared for housing additions, strip malls and various other endeavors in the name of progress it stands to reason that this prime habitat needed by the beetles is rapidly disappearing. This clear cutting has also created more edge habitat, which animals like possums, fox and raccoons favor, which compete for the same carrion.  As all to often happens when the habitat disappears so too does the creature that calls it home. Some feel that the use of pesticides and insecticides may have played a part in the reduction in numbers. Although it is reported that these beetles began their decline before the widespread use of DDT. Some claim that the extinction of the Passenger Pigeon may even have played a part in the decline of this species as well. By 1923 it was already becoming apparent that these beetles were in trouble. They were already in severe decline East of the Appalachian Mountains. By the early 1960s this decline in numbers had extended to west of the Appalachians.  If  these animals cannot develop the ability to adapt they do not stand a chance unless measures are taken to correct the problem. Fortunately for these beetles there are many Naturalists, Biologists and Entomologists trying to develop the measures necessary to save this carrion beetle. Breeding programs have been implemented in many zoos across the Eastern United States, one of those zoos calls Missouri home, the St. Louis Zoo is making great strides in breeding these beetles in the hopes of eventually releasing them in select areas within the state. I recently made a trip to St. Louis with my husband and we were given a behind the scenes tour of the Insectarium at the Zoo and shown these magnificent beetles. I was able to hold one and photograph one. They are beautifully marked with shiny black bodies and orangish-red bands on their wings. Exclusive to this species of carrion beetle is an orange mark on their pronotum. On males this orange spot will be somewhat rectangular shaped, in females it is triangular shaped. These are large beetles that reach lengths up to 1 1/2 inches. 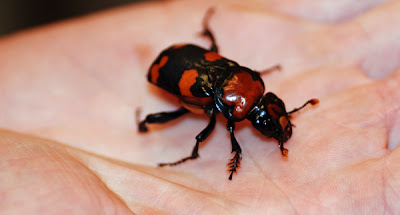 These beetles overwinter as adults by digging holes in the soil once the temperatures drop to 60 degrees. They will remain underground until the temperatures once again rise above 60F. Males will actively seek suitable carrion to attract a mate. Many beetles will be attracted to the same resource and "fights" may occur. The largest male and female typically "wins" the use of the carcass. They will move the carcass by crawling underneath and rotating their legs one over the other until they have the carcass moved to a site they deem suitable. They will then begin digging a hole to bury the carcass in. They prefer carrion in the form of birds and small rodents like chipmunks. They may dig a hole up to three feet deep. They will bury the animal and remove any non-edible parts such as feathers, feet and beaks. Those will be brought to the surface and left as a waste product. Then they will use an enzyme they possess to preserve the carcass, by inoculating the flesh to prevent it from decomposing too rapidly. They will then get down to the business of mating. Once bred, the female will lay her eggs in a small tunnel branching off the main burrow where the carcass is. The young larvae hatch in about three days. The parents exhibit remarkable parental  care tendencies. They create a noise with their abdomens that "calls" to the offspring to come feed. The larvae are attracted to the sound and crawl to their parents with begging their mouths agape waiting for their Carrion Hand-outs....think "baby bird".
If the number of larvae is too large to be sustained on the size of carrion provided by the parents, they will be sacrificed and cannibalized by the parents. Within a week the young have completely consumed all but the bones of the carcass. At this time the parents will leave the larvae behind to pupate. Shortly after, the parents will die having lived approximately one year. It takes about 4 weeks for the young adult beetles to emerge from their pupa. They will overwinter and begin the cycle over the next spring.
Key to their survival is finding the appropriate carcass; for this species it will be a bird or small to medium sized mammal. They must get this carcass buried as soon as possible before maggots and other insects take over the degradation of the carcass. Not to mention the risk of other predators finding the carcass and taking it away from the beetles and feeding on it. These beetles are nocturnal and accomplish in one night a feat that seems nearly impossible out of a creature so tiny. They must find the carcass, drag the carcass ( both working together in the same direction), find a suitable burial site, dig a hole, bury the carcass, remove the non-edible parts, mate, lay eggs and care for their offspring.
The goal of scientists is to reduce the threat of extinction by creating captive and wild populations. With an approximate 1,500 beetles left in the wild this is no small feat. Research and dedication to education will hopefully bring these incredible beetles back from the brink.
Posted by Shelly Cox at 10:06 PM