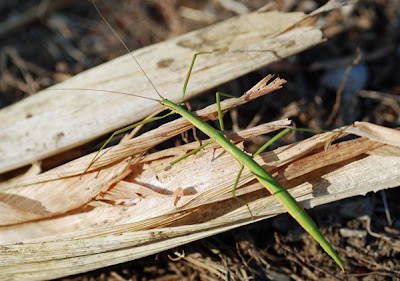 Stick Bugs in the family Pseudophasmatidae (what a mouth full that is to say) are very common in Missouri, and in spite of this fact I had never been able to find one to photograph. Or when I did see one I did not have my camera with me. I was beginning to get quite frustrated at this situation and was bemoaning the fact to a friend of mine. Stating that I had not seen one all year, much less photographed one. Later that same day he taunted me with the news that he had found one on his car!!!! He photographed it and further tormented me. This simply was not fair.

Three days later I was out geocaching with my kids when I thought I saw a blade of grass move. I must have been hallucinating. Then it moved again....and there is was.....a lovely green walking stick. I could have cried I was so excited. I know that sounds silly to get so excited over such a mundane and common insect, but to me they are such unique, and odd creatures that I find them incredibly fascinating. I took numerous pictures of it before finally releasing it back to where I found it.

These insects are the subject of many myths, including the belief that they are the devil come to earth. In many parts of the Ozarks they are chopped in half because of this superstition. I can assure you there is no demonic connection between Satan and walking sticks. These are truly one of God's magnificent creations. Their camouflage is unsurpassed, and their ability to blend in with their environment borders on magic. One minute they are there, the next they are not....look closer.....ahhh there it is again.

My husbands grandfather used to tell him as a child that these insects were poisonous and would bite, making him very sick. My husband fully believed this little falsehood until I finally convinced him it simply was not true. These insects are only dangerous if you happen to be a leaf. They will not and can not bite humans....and even if they could they possess no venom. Perhaps somewhere in the World there is a species with this ability, but certainly not here in the United States.

A few years ago we took a vacation to the Ozarks and stayed in a lovely cabin in the Mark Twain National Forest. We were sitting outside soaking up the sun and enjoying just being in such a beautiful place when out of the corner of my eye I saw a movement. I looked again and there was a LARGE walking stick crawling its way up the leg of my husbands chair. This was too good to be true. I sat quietly not wanting to give anything away. I could'nt wait to see the show when this HUGE insect climbed onto my husbands leg. Knowing his long held belief that these were dangerous insects, this was going to be great. After about 5 minutes this little insect began tickling hubby's leg. He swatted absently at it, convinced it was a fly most likely. Once again, this stick bug tickled his leg, and in one fluid movement was crawling up the side of hubby's leg. He jumped straight up out of his chair, complete with stick bug attached to his leg. He shook his leg...to no avail, this little fellow was not letting go. I was laughing quite hard by now, thoroughly enjoying his situation. He started yelling at me to "Get it!!!" Get it off me!" I finally took pity on him and gently coaxed the poor stick bug onto my hand and placed it on a nearby tree. Hubby was not nearly as amused as I was. I only wished I would have had my camera with me. Fortunately I was forgiven for laughing at his plight. 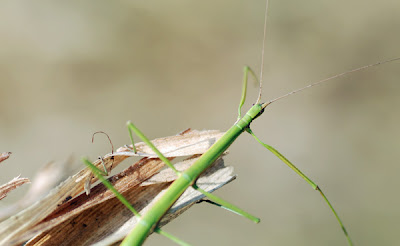 There are several stick insect species in Missouri, and the largest is the Giant Walking Stick.These stick insects may reach lengths up to 7 inches. They are by far the most beautiful of all the stick insects in Missouri. With colors of yellow, green, reddish brown and pale flesh colored legs. The one pictured here we always called a Common Walking Stick. They can be green or brown and reach lengths up to 4 or 5 inches. This one was about 4 inches in length. Walking sticks are associated with woodlands and areas with trees where they can hide among the branches. Occasionally I have seen them attached to the sides of houses, garages and other buildings. On a recent trip to Truman State Park in Warsaw Missouri I found one clinging to the bath house. I captured it and gave it to the children in the campsite next to ours. They made a lovely home for it in a large container and fed it oak leaves. They were quite intrigued by their new pet. They ended up taking it home with them when they left the following day.

Once the females have mated they will lay eggs randomly, one at a time in the timber. The eggs overwinter and hatch the following spring. The baby walking sticks will be very tiny and begin feeding on leaves immediately. By summers end they will be full grown, once the first freeze hits they will die. There is only one generation per year here in NW Missouri.


When warm weather returns next year, be on the lookout for these unique insects and....
Forget your superstitions if you dare!
Posted by Shelly Cox at 1:08 PM