Mayflies are in the family Ephemieridae, which literally translates into "short-lived" which eludes to the very short lifespan of these insects. They are one of the most commonly seen insects at porch lights in early summer or sometimes fall. The species I see more often than any other is the Burrowing Mayfly. They are also the largest species of mayfly in Missouri, reaching lengths up to 1 1/2 inches. Most mayflies are found in the Eastern United States, with only few species being found out west. It is not uncommon to have dozens of these at porch light in June, or in the case of this youtube video hundreds of thousands swarming a pole.

The Burrowing Mayfly, also known as the Golden Mayfly, is a beautiful shade of golden-yellow with pale bands across their abdomen (pictured below).As they age their coloring will become darker. 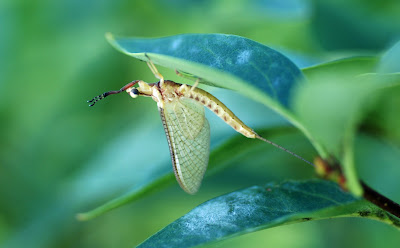 The lifecycle of a mayfly begins underwater as a nymph with seven pairs of gills. They live in the bottom sediment of streams, slow moving rivers, ponds and lakes. The nymphs feed on sediment, diatoms and several species are predatory and feed on other aquatic insects. After numerous molts (skin sheds), they will emerge approximately one year after hatching in the water. The males typically appear first, as subimago adults,meaning they are not completely formed adults yet, they will shed their skin one more time before completing their lifecycle to adulthood. These subimago's are a favorite food of trout and are often used by fisherman as bait. Trout fishermen also use mayflies as a model for the flies that they tie for bait. Mayflies are the only group of insects to have this subimago stage into adulthood. As a subimago they do not fly well, cannot reproduce and lack the coloring of the adult form that would attract a mate. Within 24 hours after emerging they will shed and become full fledged adults capable of breeding. Females emerge shortly after males and also shed their skin for the final time. Mating occurs within hours of emerging.


Time is of the essence, when you only live a day or two, or perhaps only mere minutes (for some species) there is no time to waste on frivolity. Soon after mating, the female will drop her eggs upstream in the water, the current will softly carry the eggs downstream and deposit them on the substrate in the bottom of the stream. If the eggs are laid in lakes or ponds she will drop them wily-nily on top the water, and the eggs sink to the bottom. In some parts of the world the emergence of mayflies is a sight to behold, they all seem to appear at once in a mass exodus. Millions of mayflies rising up out of the water in one large swarm, landing on every available surface may seem like a nuisance to many humans, but these little insects serve a major role in the lifecycle of other species. Mayflies are not only consumed by trout and other fish, but birds, frogs, toads, and other insect eating creatures get in on the all-u-can-eat buffet of mayflies as well.

Although their large numbers can be intimidating, they are completely harmless to humans. They cannot bite, in fact they do not have functioning mouth parts. This lack of mouth parts, also means they do not feed. Their only reason for existence it would appear is to mate, reproduce, and to be sustenance to other creatures. I did find a website that claimed they eat fruits and flowers, but in my opinion this would be fallacy. I know of no mayfly that has the ability to eat, nor do they live long enough to worry about eating even if they could. I would be curious to see what the experts have to say. This is just one example of how much mixed information is out there on the web and it pays to do numerous searches before settling on the truth about something.

I am not sure of the species of this mayfly pictured below on the Sage, but it is a beautiful shade of russet and is much smaller than the Burrowing Mayfly at only 3/4 of an inch in length. 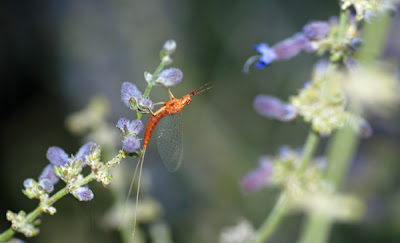