Leafcutter Bees (Megachile) are native pollinators in North America. There are numerous leafcutter bees that call Missouri home and it is often difficult to identify them to species. They are considered important pollinators from their swim-like habit of invading blooms. This effectively "picks" up the pollen and they carry it with them to the next flower. Leafcutter bees very much resemble honey bees in size, and even in color, although they are somewhat darker. They can and do sting, but this rarely occurs. Their sting is mild and rarely is anything more than annoying. Because of their mild temperament they are not prone to sting unless mishandled. Unlike Honey bees which have a colony to protect, leafcutter bees are solitary. This solitary lifestyle lends to an even temperament. 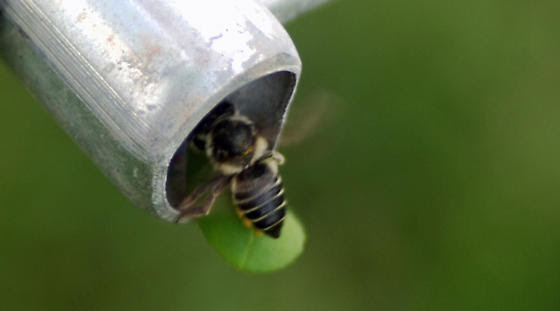 Females will seek out suitable sites to construct their tunnels that they will use to create nesting cells. They typically use soft, rotted wood; pithy stemmed plants, like roses. Each tunnel may be up to 8 inches in length and contain numerous nesting cells.
These cells are constructed of leaves that are cut by the female. She will visit various plants like Green Ash, Roses, Virginia Creeper and lilacs and "cut" a 3/4 inch half-moon shaped piece of leaf and carry it back to the nesting tunnel. There she will form it into the nesting cell. She keeps adding leaves in a layered fashion until she is satisfied with the results. These cells often end up looking much like the rolled end of a cigar butt. 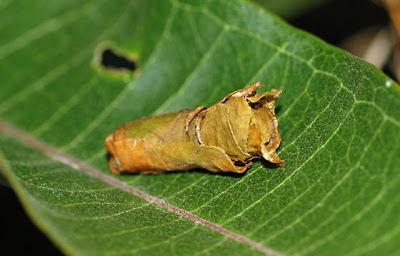 This cell pictured here was found attached to a Common Milkweed leaf. I had no idea what it was, only that it was very odd looking and perfectly formed. I submitted a picture to bugguide.net and they had no idea what it was either. I told them I would keep it and see what emerged out of it. About 2 months went by and I "remembered" I had this oddity. I checked on it and discovered that there was an exit hole in the tip of this cocoon. I looked all over in the critter keeper and there was not a single insect in there. What could have made this, and where did it go? Apparently this odd little cocoon was on Charley Eiseman's mind as well, as he sent me a comment via bugguide asking me what came out of it. I told him what happened....then offered to mail it to him so he could maybe dissect it and figure out what made it. After acquiring his address it was mailed off for him to hopefully solve the mystery. Here is his response:

I just received and examined this... it’s definitely a leafcutter bee nest cell. It was 22 mm long by 8 mm wide. The exit hole at one end was circular and about 3 mm wide. I took it apart and it was made mostly of oval leaf pieces, averaging 1 cm long, with several circular end pieces about 5 mm wide. No silk at all was used in its construction—I think the female must use her saliva to stick the leaf pieces together—except in the middle I found the remains of the thin, papery cocoon spun by the larva. How the bee escaped from your critter keeper is a mystery to me, as is the fact that you found this in the open, attached by silk to a leaf. There is some precedent for this sort of mystery:

It was so well constructed—so tightly packed—that it’s hard for me to imagine how it could have been constructed in the open, as opposed to in some snug tubular cavity like a wood boring or a hollow stem. Very mysterious. Thanks for sending it—this is the first chance I’ve had to examine one of these in person, though I pretty regularly come across leaves with the hole punches cut out by these bees. Charley Eiseman

I was delighted to know what created this, and to have been able to provide Charley with one of these nesting cells to tear apart and investigate. Insects really are marvels, when you look at the simple perfection of this cell, and then realize it was a mere insect that created it, it boggles the mind.

The female will provide each cell with a mixture of nectar and pollen, then lay an egg within the cell. She then seals up the end and moves onto the next cell. She will repeat this process up to 30 or 40 times. These eggs hatch and feed on the provisions provided by their mother. They will  pupate within this tidy little cell and emerge the following season. These bees rarely occur in significant enough numbers to cause damage to plants. In the rare occasions when they do, you may have to take measures to keep them from cutting the leaves on your prize roses. Pesticides applied to the leaves rarely deter these bees, so about the only solution is to cover the plant with a substance like cheesecloth. The good that these bees provide significantly outweighs any possible damage they may cause. They do not use homes or other human structures to excavate their brood tunnels. Although the aluminum tubed lawn chair in the first picture seemed to suit her purpose just fine. It was very difficult to capture an image of her as she entered the hole of this tube. They disappear out of sight before you can get the camera focused...they are very quick. I only manged the one blurry shot above.

There is one species M.rotundata that was imported from Europe to pollinate Alfalfa used for seed. They can do this much more efficiently than honey bees. Other leafcutter bees are primary pollinators of many other agricultural crops. These bees perform an important service to us as key pollinators. Many people lament the fact that the Honey bees are faced with challenges, namely CCD (Colony Collapse Disorder). I'm no expert, but I am not convinced that our economy and food supplies would be faced with disaster, should the honey bee decline in significant numbers. I thing our native bees could step up their game and do the job quite nicely. I have nothing against honey bees, so don't get me wrong here. In fact I hope to one day soon be raising them myself. I just hate that our native species are being ignored by so many people as a possible solution to a potential problem.
Posted by Shelly Cox at 12:00 PM