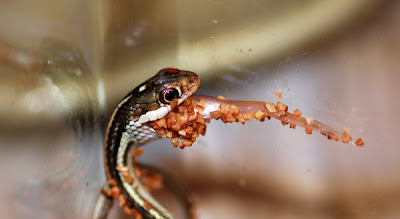 Every so often I just have to share with you some interesting reptiles....and these adorable little snakes definitely qualify as interesting. These are Eastern Ribbon Snakes (Thamnophis sauritus sauritus). There are several subspecies of this snake and all of them go by the common name of Ribbon Snake. The one native to Missouri is the Western Ribbon Snake (Thamnophis sauritus septentrionalis) I bought a pair of these Eastern Ribbons at Petco six weeks ago simply because they are so cute, and they are nearly identical to our very own native species.
I figured they would make great program snakes.This species are fish eaters and live predominantly near water. They will also eat tadpoles, frogs, salamanders, and toads. They have occasionally been seen eating insects. When threatened or disturbed they will glide across the top of the water rather than diving like other water snakes. These little snakes are also comfortable on land and will retreat to bushes or shrubs. They are closely related to Garter Snakes but are more mild tempered and will rarely bite. Reaching lengths up to 38 inches they are not a particularly large snake, and are very thin bodied. They are very similarly marked and colored as the garter snake with olive-black bodies and yellowish stripes down their backs. 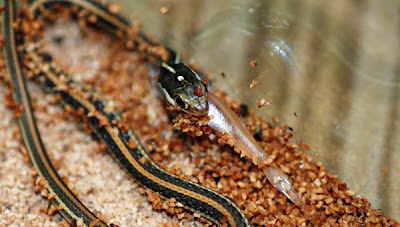 I bought them some small feeder fish and watched as they each ate two. If one had a fish the second snake would try to take it away. I had to coax the empty mouthed one to the water dish to "Show" him the remaining fish. They are aggressive eaters and fun to watch. You can see in the picture below
that this snake has a fish in his mouth and has his gaze locked onto another fish. Greedy little snakes! 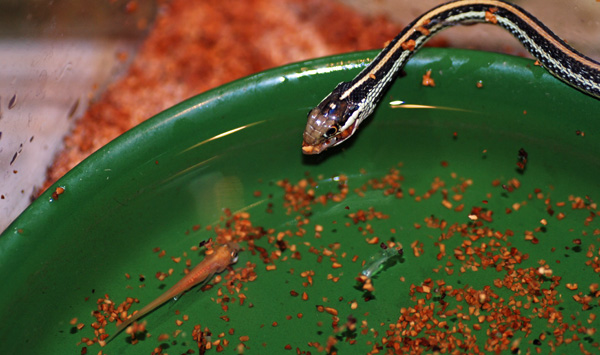 In the wild they will mate in the fall,but the female will delay fertilization and development until the following spring when she emerges out of hibernation. Gestation take three months and she will give birth to her young later in the summer. Typically they deliver 12 live babies, but litters may vary from 4 to 27. The young are usually 6 to 7 inches in length at birth. These young will be completely on their own at birth. They reach sexual maturity at age 2 years. These snakes are still small and are approximately 9 or 10 inches in length. I would say they are last years litter and won't be ready to breed until next year. I have no idea if I have a male and a female or two of the same sex, but I hope that they are a pair, it would be great to witness their breeding rituals and live birth. 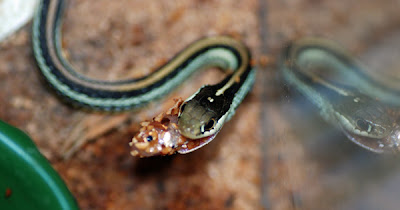