These sleeping bees are within the genus Melissodes (thank you Eric for verifying). They have a very unusual habit of locating plants on which to rest (or sleep) at the days end. Often times they will return to the same plant for many nights in a row, like the ones pictured here. They grab onto the stem of the plant with their jaws and hang on tight, rarely do they use their legs as additional support. Those must be some strong mandibles they possess!  Eric felt that there were two different species represented in the first photo one being Melissodes bimaculata and the other he wasn't sure. In the second photo is an individual within this same genus and most likely bimaculata as well, Eric further ID'd her as a female. I just love her yellow fuzzy hind legs, looks like she is wearing leg-warmers. Their common name is Digger Bees, this comes from the females habit of digging holes to lay her eggs. I think a more apt name would be "Napping Bees". 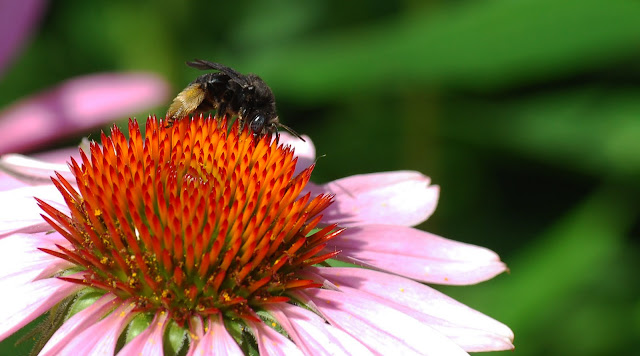 These are small bees, measuring up to 1/2 inch. Mostly black with small portions of yellow. The males have exceptionally long antennae, which earns them the nick-name of "Long-Horned Bee". There are 119 known species within North America.The species that are pictured here can be found throughout the Eastern portion of the United States as well as in New Mexico. Most species within this genus are solitary ground nesters and will dig a burrow within the soil and line it with a wax-like substance that they secrete. A few species within the genus are communal and will nest in small community nests.  Cuckoo wasps with the subspecies of Triepeolus use the offspring of these bees as the host for their own offspring.
The adults of these bees seem to prefer plant nectar from daisy's, asters and coneflowers. They are a very common sight in the mid to late summer months. I am so curious why Missouri chose the Honey Bee (non-native) as our State insect when we have so many great native bees such as these stocking-clad black bees. Not taking anything away from Honey Bees which are wonderful insects and hugely beneficial to humans, I just can't help but think a native species would have been a better representative to Missouri Insects.
Posted by Shelly Cox at 1:08 PM