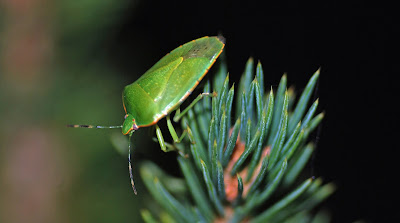 Green Stink Bugs (Acrosternum hilare) are probably one of the most commonly seen insects of the summer months. They are quite large for a stink bug and may be as much as 3/4 of an inch long, and bright lime green or grass green in color. They are sometimes referred to as Green Soldier Bugs.  They are found throughout most of North America in woodlands, gardens and grassy areas. They feed on plant juices of flowers, garden crops, farm crops, fruits, and trees. In large numbers they can sometimes be a pest and cause significant damage. They have a mouth that resembles a beak, they use this "beak" to pierce plants or leaves. Using an enzyme contained within their mouth they are able to break down plant tissue and turn it into a sort of plant slurpy. This beak also acts as a kind of straw allowing them to suck out the juices. As adults they seem to prefer the seeds of various developing plants. This preference for eating the seeds is what causes them to be such a pest.

They overwinter as adults and become active again with the return of springs warm weather.


After mating, the female will lay her eggs in clusters on the underside of leaves. They are capable of laying hundreds of eggs. These little eggs have a barrel-shape to them. When they hatch they will begin feeding on plant juices. As the nymph grows they become very colorful, and you would be hard pressed to recognize this brightly colored baby as it's adult counterpart. 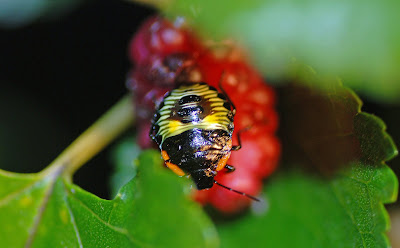 They get their common name of Stink Bug from glands located on the underside of their thorax. If disturbed they will emit a horribly stinky fluid that assures them protection from predations. Not many predators would be willing to chomp down on a meal that smells like raw sewage. There are a few birds that feed on them, apparently the offensive odor poses no problem for them. Some species of tachinid flies lay their eggs on these stink bugs, effectively using them as a host for their developing larva. 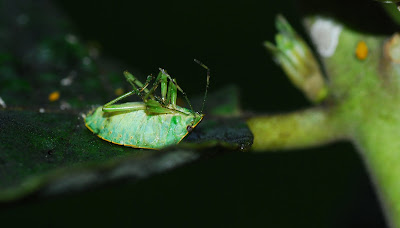 The unfortunate individual in the 3rd photo went belly up for some reason. I never could figure out why or how it died. I guess even bugs die of old age. 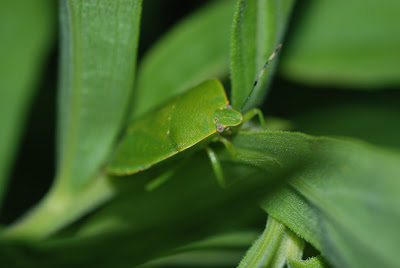 These insects are great subjects for budding photographers, they are colorful, they have a fun shape, and they move relatively slow making them pretty easy to photograph, not to mention they are plentiful.